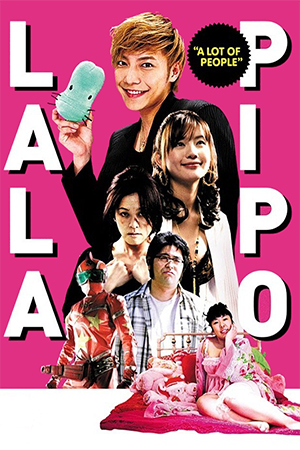 A bunch of weird, lonely and questionable characters lives criss and cross in the admittedly amusing but somewhat bad taste sex farce, ‘Lala Pipo’. Now modern society is awash with every kind of sexual service, fantasy and deviancy and nowhere more so than Japan. But with every kind of perversion on offer and money to be made from them the modern sexual underworld can be a lonely, profitable and scary place, as a lot of people find out in this very offbeat Japanese comedy.

What saves ‘Lala Pipo’ from being an exercise in bad taste is its characters. The film does address loneliness, not least in a modern world awash with every kind of sexual service available. The characters, despite some of their motives, are well rounded and all lonely and disconnected from society in some way and looking for any kind of fulfilment they can find. The cast is excellent and the characters are given personalities, meaning there is some soul to be found in amongst all the craziness. Not a film for everyone and not quite the zany comedy one might be hoping for, ‘Lala Pipo’ is nevertheless a brave film on certain levels, often funny and will push some viewers out of their comfort zone even when they find themselves laughing out loud.