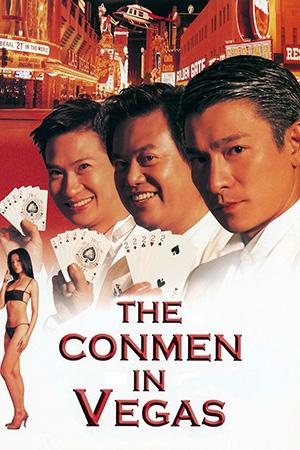 When King (Lau) and Ching (Athena Chu – although she does not appear here) part ways, King becomes something of a lost soul.  With the assistance of Dragon (Cheung) and fellow conman Nat (Chan), he decides to go on a scamming spree.  When a trick backfires and Dragon is taken hostage by a local gang the remaining two are forced into trying to raise some fast cash.  Their only option is to assist the police in bringing in a big time conman who has relocated to Las Vegas in the US taking $4 billion of the government’s money with him.  They team up with a couple of gorgeous girls and set about trying to outfox one of the biggest foxes ever known.

The good thing about this sequel to the disappointing ‘The Conman’ is that it borrows very little from its predecessor.  Rather than try to add another rehash to the aging ‘God Of Gamblers’ saga, it is clear from the beginning that it is a plain and simple comedy.  It avoids the predictable card game confrontations and openly sets out to make a fun adventure movie with a few laughs along the way.

Andy Lau is back as the mean and moody King, although this time around he displays a softer side to fit in with the overall tone of the movie.  He is still predominantly the straight man however, and he is the only cast member who seems to be exempt from Wong Jing’s favoured gurning and slapstick humour. Nick Cheung also reappears but we are left to assume that he had prior commitments as he has very little to do here. Thankfully, the ever-reliable Natalis Chan is happy to fill the void and he actually winds up doing a better job than Cheung did in the original.

For ‘The Conmen In Vegas’, Wong Jing takes the best approach that we could have hoped for – one in which he has little aspiration to achieve heights that we all know he isn’t capable of.  I highly doubt he’ll ever make a masterpiece but he can make movies that provide escapism for the audience.  The glamorous locations, beautiful women and flashes of silly humour are all passable, and ‘The Conmen In Vegas’ emerges as a perfectly watchable farce.