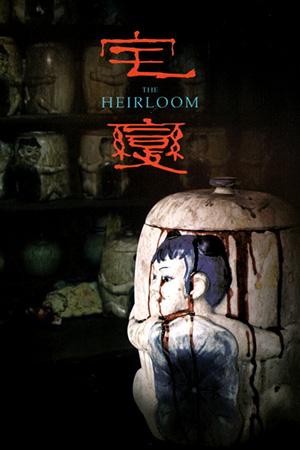 Answering the call of family inheritance, bright young architect James Yang (Jason Chang) returns home from years abroad in England to take delivery of the family home on the outskirts of Taipei, left to him through the family will. The vast, sprawling mansion has long since fallen into a state of disrepair and, although the executor advises him to sell thereby recouping a tidy windfall, James elects to set up house in the dilapidated old two-storey estate. Feeling a sense of belonging, he finally finds the resolve to commit to marriage with his long-time fiancé Yo (Terri Kwan), a ballet dancer whose career is on the verge of taking her abroad to further acclaim. Initially undecided whether she wishes to trade her career for love, Yo eventually decides to stay on for the interim with him and assist in renovating the elderly mansion.

One carefree and drunken evening, in the company of close friends Yi-Chen (Chang Yu-Chen) and Cheng (Tender Huang), James and Yo start to raise suspicions of exactly what they have let themselves in for. The stately monstrosity seems to house an unnatural presence, hidden secrets lurk amongst its bowels and in its lofty attic, and the footprints of a child appear littering hallways and open rooms without explanation. Further exploration of the home’s history uncovers the revelation that all of James’ relatives committed group suicide in the house twenty years prior, hanging themselves at midnight in silent unison. Things take a turn for the bizarre thereafter, when both Yi-Chen and Cheng find that, the instant they lapse into sleep, they soon awake back inside the Yang mansion. When one of the friends turns up dead under mysterious circumstances, Taipei detective Wu (Cheng Kuo-Cheng) launches an inquiry into the events…until he discovers that he too is unable to escape from the clutches of the house and its dark secrets.

For most serious-minded film students, the words “debut feature” and “music video director” are not the most comfortable of bedfellows. Yet here we have another young (born in ’81) director, this time originating from Taiwan and with a collective resume of music video and award-nominated short film experience under his belt, making his big screen debut in the post-Millennial fashionable Asian horror genre. However, for all the immediate imagery of crash-cutting, epileptic editing, filter-abuse and over-reliance on CG that “music video director” label would conjure, Leste Chen’s ‘The Heirloom’ (2005) is about the furthest creation from expectations that one would expect. Chen cites cinematic influences that include such international luminaries as Pedro Almodóvar, Alfonso Cuaron, Shunji Iwai and Kim Ji-Woon and, unsurprisingly, his debut feature film follows closely in the footsteps of those innovators, if not with immediate promise but stylistically. ‘The Heirloom’ is much more a mood piece than many of its contemporaries and is about as far removed from the “vengeful ghost” cycle initiated by ‘Ring’ (1998) and its countless imitators as one can get, which in turn makes it something a little more original than most.

Chen’s film is intrinsically true to its Chinese cultural origins, in that the lion’s share of its overall mood and ambience is generated from its roots within a culture rich with superstition and entrenched spiritual beliefs. To throw pleasantries out the window, as well as dispense with the script’s primary plot device (and without wishing to give away an integral facet that is centre-piece which is revealed by way of a cultural history lesson during the pre-credits sequence), the driving narrative tool is the revelation of the age-old Chinese practice of raising “child ghosts”. These tiny phantoms are borne of aborted foetuses, imprisoned within a burial urn and fed blood in exchange for wealth and good fortune, or misdeeds and malcontent against the ghost’s keeper. Under Chen’s hand that descriptive is far more shocking, and gruesome, than what the viewer is permitted to see, as Chen is more interested in building mood and exploring how supernatural events affect his leading characters than wallowing his audience in exploitative viscera-based thrills. Have I given away too much? Au-contraire, the “heirloom” of the title is only a small piece of the overall puzzle and the discovery of the eponymous burial urn only the beginning of a greater mystery that continues to unravel right until the very end.

Make no mistake though, ‘The Heirloom’ is, essentially, arthouse horror; the way Chen tells his story is stately, measured and languorous as he seems in no great rush to reveal the salient points of Dorian Li’s screenplay over establishing an all-encompassing atmosphere of moody unease. What threatens to become a dull, lethargic, talking heads ensemble soon gives way to its primary concern: creating an ambient aura of unease and dread, then gradually playing with audience expectation and eventually twisting those expectations down previously unexplored paths. The production design of the Yang mansion, by Luo Shun-Fu, is where Chen has his greatest accomplice as it is a vast, eerie construction riddled with corruption and decay. It is also engulfed in shadows, which Director of Photography Kwan Pun-Leung, who worked on Wong Kar Wai’s extraordinary ‘2046’ (2004), utilises to maximum effect. Kwan and Chen additionally opt for a colour de-saturated image, highlighting occasional artefacts here and there, to compliment the story’s relative darkened mood. Some startling Steadicam work by Jake Pollock further augments Kwan and Chen’s vision suggesting ground-level phantom points-of-view.

Where ‘The Heirloom’ really excels is the way Chen establishes unseen forces as being omnipresent and overwhelming for his central protagonists. The Yang mansion itself plays a major part in that oeuvre; once an individual has stayed within its walls it becomes impossible to escape it, sleep being the trigger that transports the unwilling party back to its festering halls without memory of events prior to waking. When Cheng Kuo-Cheng’s character, Detective Wu, becomes victim to the house’s unstoppable force, his response is to handcuff himself to furniture in his department’s offices, unwilling to accept that the supernatural could possibly be at play. Suffice to say, dire consequences result. Performances, across the board, are uniformly restrained, even understated, as events unfold with Terri Kwan (‘Turn Left Turn Right’, 2003) becoming the focal axis, and Jason Chang (‘Formula 17’, 2004) in turn engendering an interesting if not muted character within young heir Yang. Though his demeanour presents as cool and icy, casual indifference towards the fates of those around him (due to their fates being just that, and not his own), as things progress he exhibits undercurrent knowledge of his ancestry and steers towards the finale’s conflagration under the weight of a man possessed by his own bloodline.

For the casual viewer, seeking more of the same now commonplace Asiatic horror theatrics, Leste Chen’s ‘The Heirloom’ will undoubtedly disappoint as the only common denominator it shares with the sub-genre is its “vengeful ghost” (or two, or three…maybe more) motif. Outside of that idiom it is a highly accomplished and impressive debut feature, as well as studied exercise in mood, that creates an unsettling blanket of low-key tension that slowly, and deliberately, wraps itself around the viewer. There are no true “scares” to be had in Chen’s film, at least not in the traditional horror genre sense (objects or apparitions thrust into frame accompanied by a blaring soundtrack), but there are some bona fide moments of dread that will dig in and crawl under one’s skin. The only glaringly negative criticism that can be attributed to Chen’s creepy ghost tale is his borrowing of Parkpoom Wongpoom’s and Banjong Pisanthanakun’s superior Thai horror hit ‘Shutter’s climactic shock scene to cap his own. Chen’s finale may have packed more of a dramatic punch had he not elected to pay homage to ‘Shutter’ (2004), being that said film preceded his own by a year and preceded it so well. Otherwise, ‘The Heirloom’ offers an altogether different and culturally unique haunted house tale than many of its (now) run-of-the-mill peers, albeit one more subtle, studied and atmospheric-focussed, and of that we should be thankful.