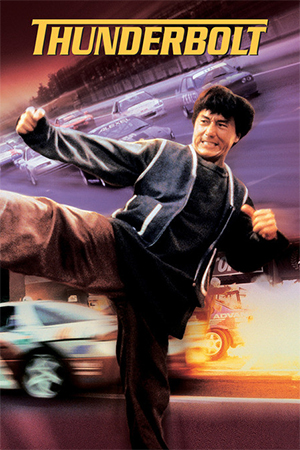 This is quite a difficult film to get your hands on considering it is a mid 90’s JC flick, which did well at the HK box office. This may be for a number of reasons, which I will come onto, but none more so than Jackie’s personal dislike of it.

Jackie plays Foh, a car mechanic in his father’s garage, who is also a great driver, and inadvertently gets on the wrong side of a crime syndicate while helping the police catch an illegal racer. As a result, his sister is kidnapped in order to make him participate in a ‘Days of Thunder’ style race.

At face value, it is a more serious film than we have come to expect from Jackie, as his character is quite mean and serious. Gordon Chan also made the film quite gritty and realistic with a higher body count and greater use of blood than Jackie normally likes to associate himself with. A bigger reason why JC may not want his fans to buy ‘Thunderbolt’ is because of how frequently and obviously he is doubled (especially for kicks), both by co-star Chin Kar Lok and Sing Ga Ban member Sam Wong (who also styled the action for ‘Body Weapon’). An early fight scene in the garage and a later one in a Pachinko parlour, clearly show an extensive use of doubles, and while the scenes are well choreographed, they lose their sparkle when you see Jackie doubled like this. It is made worse by the camera angles used to cover up for it!

The car racing sequences and stunts created by Frankie Chan Fan Kei are generally impressive and well shot, even if the finale is a little too long, and Gordon Chan’s direction gives a particularly Hollywood feel to it. He is an accomplished director, and has greater cinematography skills than most Hong Kong directors, as can also be seen by the fantastic ‘Fist Of Legend’.

One point to note is that, in my opinion, the obvious wirework used to enhance the fights actually looks good here and it’s a shame that Jackie will not incorporate them a little further into his other work. He does often employ them to help with some kicks (especially in ‘Gorgeous’) and emphasis of impact, but if used in the way they are in ‘Thunderbolt’, they could put an extra few years onto his screen-fighting career.

If like me, you have already come to terms with how often Jackie does use doubles, compared to how much we are led to believe, then the film is worth four stars due to the quality car and fight action, as well as being a gritty thriller. However, if you live in a bubble where you believe (and who can blame you with all the hype!) that Jackie is his own stuntman and can still do what he was doing in the 80’s then you would probably be better off leaving this movie alone, as you will only end up having those illusions shattered. Harsh but true, and it’s happened to the best of us at some point!