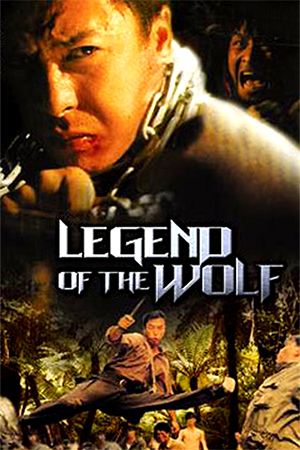 Wolf (Yen) was one of the most lethal assassins known to man until he lost his memory.  Now he has resorted to wondering the land searching for the only thing that remains in his heart – his love for a woman.  Along his travels he is ambushed and fends off his attackers using his superior sword technique.  When a local man (Wong) sees such heroics he offers his assistance as a guide for the lost warrior.  However, the killers are relentless in their quest and when Wolf is taken by surprise a mysterious woman comes to his aid.  As Wolf’s relationship with his new found friends begins to blossom, the village in which they reside is taken siege and only Wolf is strong enough to put up any kind of resistance.

Marking his directorial debut, Donnie Yen attempts to make ‘Legend Of The Wolf’ into a cross between a kung fu classic and a thinking man’s love story.  Sadly, it doesn’t come close to being the latter, mainly due to some fairly inept storytelling.  Presented in a confusing flashback format, the film really doesn’t have much of a plot other than the predictable “amnesia” excuse.  Characters have little substance and seem poorly motivated, particularly Wolf who really has no reason to jump into action every five minutes. The romance doesn’t fair much better either, as it’s blatantly underdeveloped and it seems unlikely that many will really care about the outcome. The only real connection between scenes is the action, and this is pretty much the sole reason for watching to the end.

Kung Fu classic then?  Well, not really.  The quality of the fight sequences really depends on what half of the movie you’re watching. For the opening segment, Yen displays a fair bit of impressive bootwork but unfortunately it’s undercranked to the extreme, giving you the distinct feeling that you hit the fast forward button by accident. The editing is also pretty unbearable, with a constantly shifting camera angle and a lot of blurred shots that do little to impress. However, as the movie progresses, the action takes a turn for the better.  The last twenty minutes in particular, are where it really kicks into gear and the pace goes up a few hundred notches. All of sudden we get a flurry of superb kicking combinations and some insane energy that really sucks you in. Now, I’m not saying it’s perfect but it’s a huge improvement and it certainly shows a lot of promise.

If you’re okay with quick cut fight scenes and plenty of undercranking, then you’ll probably appreciate a lot of what ‘Legend Of The Wolf’ has to offer. The plot definitely leaves a lot to be desired but I’d say the final fight is worth the admission price alone.