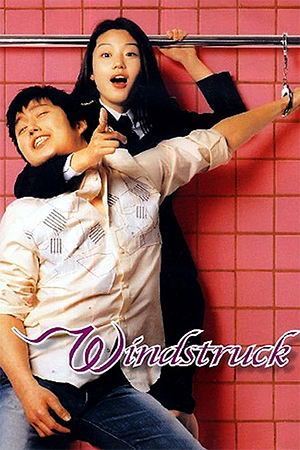 How do you follow up one of the most successful and most imitated Asian rom-coms in recent years? The two options are to a) try to replicate it’s success with a sequel or a carbon-copy of the original and b) attempt to explore pastures new. Kwak Jae-Young, to his credit, made two films before deciding to resort to option ‘a’. ‘Windstruck’ is quirky, comical and tragic in much the same way that ‘My Sassy Girl’ was, even going as far as recalling Jun Ji-Hyun as another sassy girl.

While doing his duty as an honest citizen and chasing a bag snatcher, physics teacher Myung-woo (Jang Hyuk) is mistakenly arrested by temperamental police woman Kyung-jin (Jun Ji-Hyun) and subjected to a rather aggressive interrogation at the local police station by her. After she is eventually convinced that Myung-woo is innocent, but adamant that she should not say sorry, Kyung-jin decides to apologise by making her feelings known in front of the teacher’s all-girl class. What follows is an unusual relationship that gradually develops into a tender romance when Myung-woo begins to discover why his new friend is the ways she is. However, the hot-headed police woman is constantly putting herself in dangerous situations in her bid to prove herself to her superiors, while long-suffering Myung-woo faithfully puts himself in danger to help out. Then, one such situation spawns an incident that proves to be a major turning point in the lives of the young lovers.

If you didn’t like ‘My Sassy Girl’, it’s unlikely you’ll want to watch ‘Windstruck’. Even if you did like the Kwak Jae-Young hit, you may initially feel slightly resentful when it appears that ‘Windstruck’ is exploring identical themes. Nonetheless, this is the kind of film that rewards the patient viewer, taking the strengths of ‘My Sassy Girl’ and using them as a catalyst to explore other avenues. This amounts to an even more implosive odyssey through the emotional mangle – the Asian cinematic skill of juggling comedy, romance and tragedy is never as extreme as it is here.

‘Windstruck’ could initially be seen as ‘My Sassy Girl 2’, so similar is its set-up and execution. Director Kwak Jae-Young seems to use the old ‘if it ‘aint broke, don’t fix it’ edict, refusing to tamper with a winning formula and quite content to let beautiful, yet brooding Jun Ji-Hyun dominate the proceedings once again. However, after thirty episodic, but thoroughly enjoyable minutes, Kwak ups the ante and takes ‘Windstruck’ to a very different plain. Without resorting to spoilers, ‘Windstruck’ turns from the gentle trappings of the rom-com sub-genre into full blown drama, a transition that is far more powerful than ‘My Sassy Girl’ and even more melodramatic.

With the scope for drama increased, ‘Windstruck’ becomes an appropriate platform for the thespian skills of its leading lady. Kyung-jin begins as a carbon copy of the infamous ‘Sassy Girl’, but Kwak Jae-Young stretches her as the film progresses, throwing her into gruelling situations in order to achieve his goal. By the time the film reaches its soul-stirring denouement, Kyung-Jin is a rounded character and not just an outlandish cartoon character full of idiosyncrasies. Jun Ji-Hyun is exceptional in this draining role and shows a remarkable range, swinging from ill-tempered to distraught sometimes within the same scene. She sparks up the same rapport with love interest Jang Hyuk (who is equally capable as the quixotic Myung-Woo) that she achieved with Cha Tae-Hyun in ‘My Sassy Girl’, but ‘Windstruck’ affords her a greater opportunity to test her acting talents.

As with ‘My Sassy Girl’, ‘Windstruck’ is an extravagant two hours in length, a fact that eventually becomes its undoing. The aforementioned acting is first-rate, the characters appealing and the twisting plot engrossing, but Kwak Jae-Young truly needs to utilise the talents of a good editor. While the director crams the narrative with incident, he occasionally repeats earlier sentiments in wasted scenes and therefore lets the pace ebb away. ‘Windstruck’ copes with an epic running time better than many of its contemporaries would’ve done – largely thanks to the power it exerts over the viewer throughout – but it still smacks of self-indulgence.

Though ‘Windstruck’ stumbles in the same areas as ‘My Sassy Girl’ did, it thankfully succeeds in a similar way. It takes an innocent everyman, someone who viewers can warm to, and lands him in the frenzied world of his erratic ‘girlfriend’. Though such an idea is no longer original, the comedy still works well and the subsequent drama is given greater resonance because of it. Kwak Jae-Young also concludes the film with a very playful, highly controversial ending that cements the connections to ‘My Sassy Girl’ once and for all. While some have commented that this twist degrades ‘Windstruck’, turning it into a wannabe sequel, this reviewer found it to be a welcome link to past glories and a cheeky way of linking two different cinematic worlds. In the end, the interpretation is left to each individual viewer.

From surreal comedy to heart-wrenching drama, ‘Windstruck’ is the kind of sprightly amalgamation of themes that would have to be severely diluted to get an expected Hollywood makeover. It’s fresh despite its obvious allusions to ‘My Sassy Girl’ and has that unashamed attempt to stir the viewer that only Asian cinema seems to have mastered. Melodramatic, beautiful, witty, hilarious, tragic, heavy-handed, overlong… ‘Windstruck’ is an enjoyable enigma that has enough virtues to make even a stoic critic a little more forgiving.