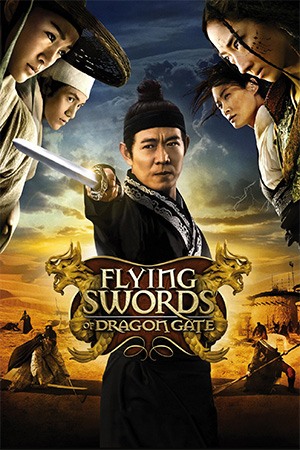 Some twenty odd years after ‘New Dragon Gate Inn’, Tsui Hark returns to the desert to tell another tale of highflying heroics at the titular sand sunken drinking hole. While the 1992 version (itself a remake of the 1967 film, ‘Dragon Inn’) was a muddled and somewhat lethargic affair, it was saved by an impressive visual style, Donnie Yen’s cool villain and (eventually) some wicked wuxia wire fuelled action. This time around, nifty wirework is replaced by dodgy CGI and, unfortunately, the ever-dreaded 3D: the dreaded format most notable directors, such as Hark, cannot seem to resist the temptation to try out. To say the results are disappointing is an understatement.

Everything was in place for this to be a great old school style wuxia spectacle, what with Hark at the helm, a decent budget and superstar Jet Li starring. Unfortunately this half baked tale of various groups of assassins, vigilantes and rogues converging on the desert based inn in the hope of finding a hidden treasure gets bogged down in far too much jumbled storytelling and way, way too much sub par CGI effects and 3D Trickery. There are perhaps too many characters thrown into the mix, none of whom we become attached to making it hard to care about what is going on. Add in the fact the man Li is underused and often looks like he is just going through the motions and you’ve got a narrative that, unfortunately, fails to engage. The 92 ‘Dragon Gate Inn’ suffered a similar plight but managed to hold it all together thanks to some tight direction and the action being done practically i.e. no cheap CGI.

While the ever evolving ways in which films are shot and made are continually embraced by directors like Hark, the over reliance on CGI and 3D gimmickry ruins any chance of ‘Flying Swords’ being a fun kung fu flick. Other than the impressive opening shot, featuring the camera swooping over and through a ship yard/docks the 3D effects and CGI often look cheap and fake. This in turn ruins a lot of the action scenes, where 3D and CGI play a big part, meaning that when Li and the rest of the cast cut loose everything turns into a blur of messy editing and CGI. In addition, the dreaded CGI stuntmen are used in a lot of the action scenes to show the characters performing outlandish and death-defying fight moves which ruins any flow or excitement of the fights (and makes one feel like they are watching a cheap video game). Wuxia films of this type used to rely on wirework a lot of the time to achieve such outlandish feats but now it seems CGI is the route to take and it’s a shame it’s a route Hark chose to take on this particular occasion.

Those less critical may get more out of ‘Flying Swords’ as there is still a lot of high flying action on offer, despite it being stuffed with CGI, and the film certainly has a rich visual style. However, by the time Li and the chap he’s fighting mount horses and race into the giant sandstorm which threatens to destroy the inn to continue their fight, one will probably have reached 3D CGI fatigue. Hark is still a great filmmaker and his previous effort, ‘Detective Dee’, featured a lot of CGI trickery but that film brought out the director’s creative flair while ‘Flying Swords’ just feels like bloated 3D CGI nonsense. Shame.