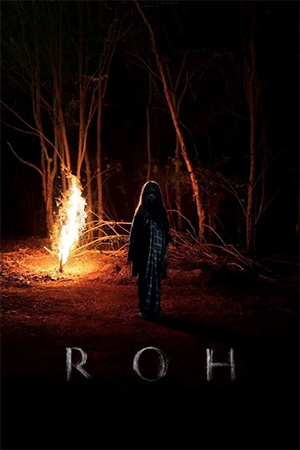 A simple set up and a short runtime belies what is a beautifully crafted and extremely spooky tale of Malaysian folklore, ‘Roh’ being a swift sharp shocker. Set decades ago in a vast Malaysian jungle, ‘Roh’ tells the tale of a family (mother and two kids) living alone in the wilderness who are visited one night by a lone child covered in blood. Giving said child shelter, she warns the family they will all die at the next full moon in a few days. She then slits her own throat! Removing the dead child from their premises, the family soon begin noticing strange things and that something evil may have entered the forest. A hunter brandishing a spear appears looking for the dead child and a woman from a nearby village also shows up offering potential protection. But what are their true intentions, who is telling the truth and as madness takes grip, whose soul is really at risk.

Slow burn and tense filled horror that relies more on a continuous and thick sense of dread rather than jump scares and oodles of gore, ‘Roh’ is serious horror that gets under the skin. Backed by a small but committed cast (including the youngsters who play the various children), ‘Roh’ effectively weaves its tale of demonic possession, rural isolation, and supernatural folklore into a satisfyingly spooky whole. While there are moments of brutality, the film is far from a gorefest relying on effective tension to build unease and the power of otherworldly folklore to make madness permeate throughout the jungle and those who inhabit it. First time feature helmer and co-writer Emir Ezwan uses ambiguity well to keep the sense of unease and spookiness ever present, never resorting to cheap shocks or gore to thrust the action forward. He has also crafted a beautiful looking film (despite the disturbing subject manner) via incredible cinematography, shot compositions (great use of wide shots and economical editing!), and pacing to create one spooky tale.

While ambiguity is used well, it is perhaps laid on a bit thick in the finale meaning there are questions and actions left unanswered which will frustrate some. While the ambiguous can be effectively used to encourage imagination and therefore create even scarier scenarios/monsters in the viewer’s mind (and there are those who will always argue it’s better not to explain everything/show the monster – not sure I always agree with this!) it can be overplayed and rob a great story of a rewarding conclusion. ‘Roh’ teeters on the edge of ambiguity overload but manages to stay on track to deliver a superior albeit nihilistic supernatural shocker.