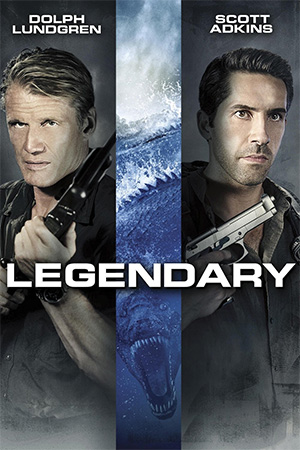 Monster madness abounds in China as ace Cryptozoologist Travis Preston (Adkins) and his team of do-gooders attempt to find and preserve a rare prehistoric beastie running rampant around the lands. While not altogether sure what they are looking for, or where to find it, they must also do battle with vicious trophy hunter Harker (Lundgren) who having got wind that it’s a rare giant lizard running amok, wants to be the first to slay the beast.

This joint British and Chinese production is a lot of silly fun that makes no bones about being a good old fashioned monster romp. As has been noted elsewhere on the net and much to Adkins and Lundgren fans dismay the two do not fight or engage in any martial arts action. This will certainly be a disappointment to those expecting such high kicking action but if one knows there are not many fisticuffs on display going into the film, then one may still have a lot of fun. The two stars both have plenty of martial arts heavy films in their back catalogues so it’s a nice change of pace for the two action movie stalwarts. Adkins certainly seems to be having fun as the daring adventurer and while Lundgren isn’t in it that much he does make for a suitably gruff antagonist. The film rockets along on its adventurous charm with the likes Crystal Huang Yi (‘Drug War’) and Nathan Lee offering solid support among the likeable Chinese cast.

Sure the CGI is a little ropey but ‘Legendary’ certainly delivers the monster action. The flick is happy to have its creature out on display, front and centre, and causing lots of chaos for the cast which makes the film all the more enjoyable. The cave set finale especially delivers some great monster action as the heroes attempt to capture the beast while Harker tries to kill it! Coupled with some great location work and impressive cinematography from Shu Yang (‘Sacrifice’), ‘Legendary’ overcomes any budgetary limitations to deliver a solid adventure that harkens back to the fun monster movies of yesteryear.

If one can get past the fact it’s an Adkins film without much fighting action in it and go along for the creature feature ride then there is some monstrous fun to be had with this giant lizard B-movie quickie.