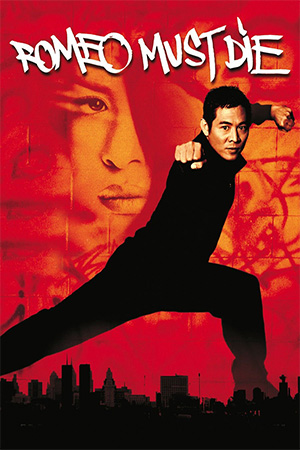 In Oakland, San Francisco the streets are ruled by two rival gangs – the Chinese Triads and the American Mafia.  When the son of the Chinese boss is brutally murdered, old wounds start to flare up.  Han Sing (Jet Li), the brother of the murdered man, is currently serving time in a Hong Kong jail but when he hears the terrible news he escapes and heads off to face the killers.  Arriving in San Francisco, Han accidentally runs into Trish O’Day (Aaliyah) and there is an instant attraction.  Unbeknownst to him though, she is the daughter of the leader of the American Mafia who Han believes to be the men behind his brother’s murder.  Han and Trish decide to team up to find the truth and hopefully unite the two families in the process.

‘Romeo Must Die’ marked Jet Li’s first starring role in an American movie and was supposedly inspired by Shakespeare’s ‘Romeo and Juliet’. As intriguing as that idea may sound, it quickly becomes apparent that the only aspects of the story that remain are a wafer thin romance and feuding families. The rest of what ‘Romeo Must Die’ has to offer is pretty standard action fodder. Well I say standard, it is also part of that whole “rap-fu” phase so it’s packed full of horrific stereotypes and hip hop interludes. Putting that aside though, the film certainly isn’t the worst Hollywood has to offer. Jet Li definitely makes for a likeable leading man and there is a hint of chemistry between Li and Aaliyah. There’s also some solid supporting performances from the likes of Russell Wong and Isaiah Washington, as well as a few pleasing flashes of comedy.

The fights in ‘Romeo Must Die’ are all about wires and this is really what lets the side down. Corey Yuen Kwai has often made use of wires in the past, but he has generally used them in an effective manner. Sadly that isn’t the case here though, as it seems like just about every sequence contains some superhuman manoeuvre.  While I have no problem with this in theory, the execution is at times terrible and you can blatantly see the actor/stuntman awkwardly fumbling around. That aside, there are still a couple of decent fights to be found in ‘Romeo Must Die’, the best of which is probably the final fight between Li and Russell Wong.

The idea behind ‘Romeo Must Die’ was an interesting one but the finished product winds up being distinctly average. If you can tolerate the whole hip hop aspect however, there are still a few fun fights and a solid performance from Li that make it entertaining enough.