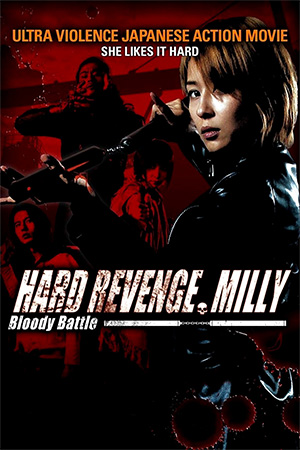 After exacting her bloody revenge, Milly begins to question her purpose in life and starts to fill her time by launching into one pointless fight after another. That is until a young girl by the name of Haru approaches her with a very familiar tale of woe. Finding herself moved, Milly decides to take Haru under her wing and begins training her in the art of combat. However, Jack’s followers are still out for vengeance and it isn’t long before the pair find themselves knee deep in a series of bloody battles.

Although it strangely chooses to ignore the events found in the original film’s post-credit cliff-hanger, this second outing for ‘Hard Revenge, Milly’ successfully manages to build on the concept by adding some much needed meat. Armed with an extended running time, the film is able to establish a focused narrative (albeit a slightly silly one), which gives Tsujimoto the chance to mix in some interesting new faces and throw in the odd twist or two. Similarly, the story uncovers additional details about Milly that definitely inject some more depth into the character and give her a more three-dimensional feel.  Unfortunately though, it does still flaunt some absurd dialogue and far too many moody silences for my liking, but that’s hardly a crime for a film in this genre.

As with the storytelling, the action in ‘Hard Revenge, Milly: Bloody Battle’ has received a positive overhaul. Rather than building up to a single confrontation, we are treated to multiple, well-choreographed battles that are more about weapons than wires. Miki Mizuno certainly seems to be right at home with a weapon in her hand, and when she whips out the nunchuks it really makes for some rip-roaring duels. When it comes to the blood-letting, it just about manages to remain on the fun side of silly, with exaggerated injuries that see eyes popping out of heads, limbs being sliced like butter, and bullet holes the size of a small crater.

‘Hard Revenge, Milly: Bloody Battle’ is a definite notch up from its predecessor that shows Takanori Tsujimoto is blossoming into a competent filmmaker. Packed with exciting fight sequences, huge helpings of blood and some solid leading performances, it is clearly one of the more enjoyable examples of Japanese VCinema.