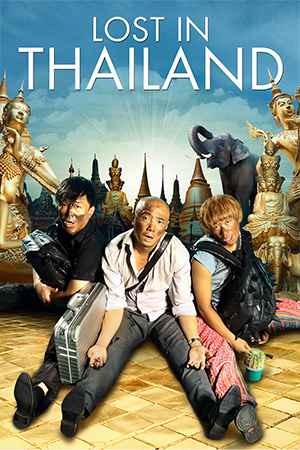 One film released in 2012 made an unlikely impact on Chinese cinema. It wasn’t ‘The Avengers’, ‘The Dark Knight Rises’ or even the massively popular release of ‘Titanic’ in 3D – it was a local film that cost just $2million to make and yet, at the time of writing, has just weeks before it overcomes ‘Avatar’ as the biggest film ever released in China.

Xu Lang has been working on a revolutionary formula that can expand the molecular structure of oil, potentially ending the worldwide energy crisis. To sign a deal with a potential investor, Xu must travel to a temple in Changmai, meet the contact at his spiritual retreat and get his paperwork approved. Unfortunately the details of where in Changmai the temple is remain sketchy as Xu leaves Beijing and a close rival is tracing his every move to get to the investor first.

While on the flight to Thailand, Xu meets an unsophisticated bumpkin Wang Bao who is travelling East to work through a wish list of things to do, one of which involves marrying Fan Bingbing (something many can relate to!). Wang’s childish exuberance and monumental naivety quickly rubs Xu up the wrong way, but little does he realise that this lovable oaf is destined to play a significant part in his journey.

That old conceit of two opposites thrown together, initially hating one another but eventually becoming unlikely friends has been at the centre of some great films: ‘The Odd Couple’ (one of the finest comedies ever), ‘Midnight Run’ and ‘Planes, Trains & Automobiles’ are three that spring to mind. That said, the majority cannot claim to reach these heights and many have been found treading the water in cinema’s shallow end. It is with a certain amount of surprise on my behalf (having been massively underwhelmed by most of the recent films from Mainland China) that I can report that ‘Lost in Thailand’ has more in common with the former category than the latter.

The incredible financial success of the film may have been impossible to predict, but even without prior knowledge of its acclaim, it’s easy to see why it should be so popular with local audiences. The leading pair are a superb Chinese version of the classic straight man/funny man set-up, playing off each others’ idiosyncrasies with natural verve. The key to this kind of dynamic is to make one character easy for us to identify with while the other, though infuriating, is oddly sympathetic. Wang Baoqiang is perfect in the latter part as he retains a certain innocence that makes his exasperating actions endearing; there are times when our patience is tested, but the story barely allows enough time to wallow on such points.

‘Lost in Thailand’ is a remarkable debut for writer/director Xu Zheng, especially as his turn as the film straight man is also so impeccable. The script he works from provides a level of wit that many modern comedies ignorantly forego and this is juxtaposed with some great moments of classic farce. As director Xu even knows when to squeeze a measure of pathos into the story without its presence becoming suffocating or mawkish. This is a film-maker who understands the craft of comedy remarkably well and promises much for the future. As a first feature, ‘Lost in Thailand’ is as impressive as it is amusing and that really is saying something.