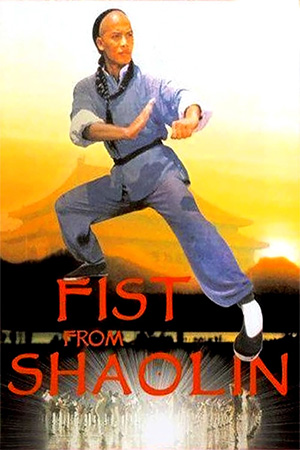 One of the good things about the new-wave kung fu boom that hit Hong Kong after the success of the ‘Once Upon A Time In China’ films was the uncovering of the odd low-budget gem. Some inventive directors managed to get enough money and imagination together to make a good strong addition to the endless blockbusters that cashed-in on this genre. The difficult-to-find ‘Fist From Shaolin’ fits this description acutely as it showed that there’s no substitute for top quality fight action devoid of obvious wire-fu.

Wang Qun steps into the intimidating shoes of China’s greatest hero, Wong Fei Hung, a character who has been played by many of Hong Kong’s greatest stars. Once again the honourable master is joined by familiar sidekicks Bucktooth So and Ah Fu in a story focusing on the intrigue and tension of late 19th century China. Foreign forces are pressing in on the local population and opium is finding its way onto the streets. Alongside this popular evil is the growing slave trade that means children are in danger of being taken of the street for forced labour. The warm-hearted kung-fu master concentrates his efforts on fighting these oppressive dangers and defending the honour of his home town. His work is increased when he meets his future sweetheart Auntie Yee and becomes embroiled in aiding two street children who escape the slavery trade. In fact it is these two young friends who later need to aid Wong Fei Hung as he finds himself on the trail of justice.

Although ‘Fist From Shaolin’ doesn’t pretend to have the strong social and historical commentary that the first two ‘Once Upon A Time In China’ films had, it still retains an interesting and relevant narrative. The common threads of foreign cruelty are recycled once more, but prove to be effective for the purpose of the storyline. It’s also obvious that Wang Qun doesn’t have Jet Li’s considerable presence, however he puts in a good performance as the immensely popular figure. ‘Fist From Shaolin’ really stands out with its powerful choreography which, even after numerous other fine new-wave productions, remains very impressive. The cast is full of talented performers who make sure that every scene of frenzy is well worth rewinding to watch again. Overall then, this is an above-average feature with enough good points to warrant a purchase. Not an easy film to track down, but worth the necessary effort.