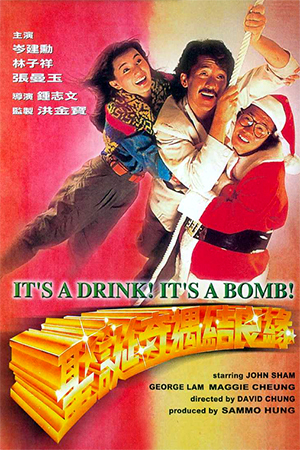 David Chung – seemingly one of the forgotten directors of the 80s despite his work on such minor gems as ‘I Love Maria’ and ‘Magnificent Warriors’ – added a zany comedy to his eclectic canon with this cheerful 80s hit. Filled with notable faces of the era (George Lam, John Shum and a pre-arthouse Maggie Cheung), ‘It’s A Drink, It’s A Bomb’ is saddled (or blessed depending on your perspective) with one of the strangest titles in cinema history. Thankfully, it also serves as a useful synopsis of the basic idea behind this slapstick flick.

Three unlikely allies – Cat (Cheung), Bobo (Lam) and Lionhead (Shum) are thrown together when they come into possession of a new experimental explosive. On their trail are a pair of Japanese assassins (Tsui and Ko dressed like they’d just come off a ‘Human League’ tour) who will stop at nothing to get their hands on the highly-prized weapon, while an apparently friendly police inspector also has an interest in the device. It’s left to the trio of hapless to evade both the criminals and the police in a bid to survive until they can discover just who can be trusted.

An unapologetic slice of the beloved insanity of 80s Hong Kong comedy, ‘It’s A Drink, It’s A Bomb’ is far less interested in developing a logical plot and far more devoted to the increasingly bizarre situations our protagonists find themselves in. However, such a shameless exercise in fun and frivolity is difficult to criticise due to its repetitive storyline – admittedly, Chung’s film does repeat the same predicaments for its heroes and strays towards losing the vibrancy of the opening half hour, but the director admirably manages to reign things in towards the end.

Enjoyment of ‘It’s A Drink, It’s A Bomb’ and its ilk is very much dependent on the following… Can you tolerate the airy tones of a hysterical John Shum? Can you forgive George Lam’s less than electrifying presence? Can you sit through the most blatant piece of sustained product placement (in this case soft drink Sarsae) since ‘Mac And Me’? If the answer is yes to these questions, this is an undemanding 90 minutes that never alludes to high art and will be enjoyed by most of those who see it. David Chung may still be a name that is barely recognised these days, but his ability to helm consistently entertaining features from unlikely ingredients is sorely missed in this supposedly more cultured day and age. A blast from the past, pure and simple.