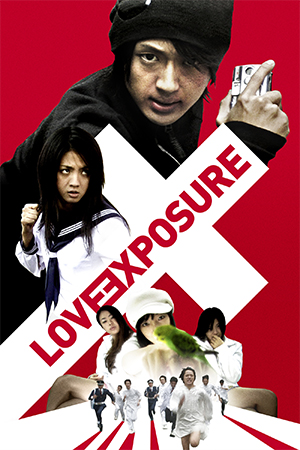 Now here’s a film which will split viewers down the middle: a 4 hour, yes 4 hour, epic about love, religion and all manner of weirdness from one of Japan’s most out there directors, Sion Sono (director of equally love ‘em or hate’ em films ‘Suicide Club’ and ‘Noriko’s Dinner Table’). Subverting the norm and taking the unpredictable route at every given chance, ‘Love Exposure’ not only explores the nature of love to its most extreme conclusions but pretty much dissects and in many cases destroys the weird, the wrong and the generally out right bizarre of Japanese culture. Epic: yep! Overlong: most definitely. Challenging: for sure. In love with itself just a little too much: oh yeah. But an experience like few other films: absolutely.

Attempting to summarize what ‘Love Exposure’ is about is a task in itself but it essentially boils down to a boy, Yu (Nishijima) falling for a girl, Yoko (Mitsushima). Yeah that age old story device we’ve seen a millions times before but their route to true love is unlike any you may have seen before and takes in all manner of craziness over the 4 hour run time. Shono throws pretty much everything but the kitchen sink (wait, no, that might have been in there too) into the mix in attempt to keep his two protagonists apart until the very last (and I mean last) second of the film. Christianity, organized religion and cults come in for a roasting and pretty much everyone of the main characters is driven mad by one or the other at some point during the film. Panty-peeking kung fu (which has to be seen rather than explained) takes up a good chunk of the running time as our “hero” seems to be on a one man mission to photograph the underpants of every girl in Japan! Lesbianism, child abuse, school shootings, lots of shouting, kung fu, incredibly long quotes from the Bible, a very strange porno company and convention, pretty much every kind of perversion, cross dressing, samurai swords, lots of falling over, ultra violence and true love all get covered at some point as well. Oh, and there is a severed penis in there as well. Just in case the film wasn’t offbeat enough already.

Is it a case of just trying too hard? Well, yes and no. No doubt avid fans of alternative cinema and lovers of anything that is remotely off the beaten track and attempting to push boundaries will lap ‘Love Exposure’ up for all its worth. The first hour and half whizzes by with its infectious absurdity (the title card appearing an hour into the film no less and in the middle of a fight scene!) before the inevitable dip in pacing rears its ugly head. Now any film that lasts over 4 hours is going to dip in its entertainment momentum at some point. I mean a lot of 2 hour films do. Now, Shono’s film still holds the attention, its weirdly captivating style swerving relentlessly from madcap comedy to dark and twisted horror with regular aplomb. Yet certain story strands, or chapters as they are shown in the film, go on for too long, plot developments laboured to the point of ridiculousness, Shono desperately trying to achieve an epic nature to his story of messed up love. Which, despite the dips in pacing and some over ambitions, he actually does achieve. If the film is one thing, it’s certainly epic.

What keeps ‘Love Exposure’ on track for most of the lengthy running time is the extremely committed cast and Shono’s surprisingly un-flashy approach to all the mayhem. The writer/director lets the characters and their absurd situations and actions speak for themselves rather than dressing everything up in flashy camera techniques and tricksy editing. Shot on what appears to be a low budget it’s the characters that shine through with their unique blend of weirdness and heart. The entire cast plunge themselves into the madcap mayhem, embracing any mental, taboo busting u-turn their characters take. The young leads especially shine not least Nishijima and Mitsushima as the confused love-struck leads. But its Sakura Ando who steals the show as the evil, twisted drug dealing, cult worshipping schoolgirl who sets in motion most of the madness the leads experience. She’s sick, violent, off her head and the young actress Sakura Ando revels in every twisted moment she is on screen.

Not entirely successful but a unique and often entertaining experiment in itself, ‘Love Exposure’ might not be wholly satisfying or successful in its aim to push madcap love into the face of the viewer but is certainly a piece of Japanese cinema that will stay in your mind long after the 4 hour running time is up. Pretentious: sure. Entertaining: oh yes. Oddly touching and sweet: yep. Should be seen and experienced the next chance you get: absolutely.