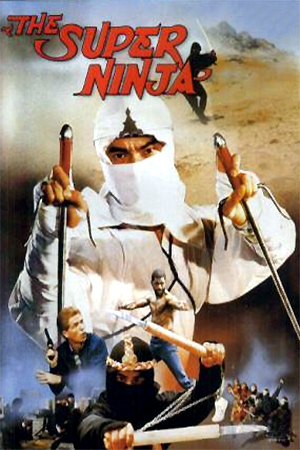 When a formula is created that can supposedly cure Cocaine addiction, every criminal in town wants a piece of the action.  Luckily the professor responsible for this amazing discovery has a protector in the form of his son-in-law, John (Lo Rei) who is a strictly by-the-book Police officer.  However, they didn’t count on the mysterious Mr. Tong taking an interest and with the help of his gang of Five Element Ninjas he disposes of the competition and goes after his one remaining obstacle: John.  Rather than using his own forces though, Mr. Tong bribes the police into framing John on fake drug smuggling charges and he is arrested and tortured extensively.  Using his Ninja abilities, John is able to endure the physical pain but when his girlfriend is taken hostage it becomes personal!  He escapes and heads out to rescue the woman he loves.

Another day, another Ninja movie for Alexander Lo Rei.  This time around, Lo Rei is a well trained Ninja who is forced to re-discover his skills when his girlfriend is kidnapped… wait a second!  Haven’t we seen this all before?  Okay, you’re right, the plot to ‘The Super Ninja’ is not that original and is, at times, extremely frustrating thanks to some bizarre racial stereotyping and underdeveloped characters. Luckily though, the action is on hand to make amends.  Lo Rei once again proves why he was the Ninja of choice when it came to making films in this genre as he unleashes some impressive bootwork and acrobatics that are worthy of any fight fan’s attention.  Each scene is also well choreographed to include original combinations and techniques, allowing for some highly intense action sequences.  Sadly, a lot of it is played back at speeds where it just looks plain ridiculous but it’s still entertaining enough to allow you to look beyond this.

‘The Super Ninja’ comes very close to becoming a highly recommended film on action merits alone, but sadly the infuriating undercranking and total disregard for plot stop me from giving it the complete thumbs up.  It’s still a fun little romp though, and one well worth watching if you’re a fan of Alexander Lo Rei.