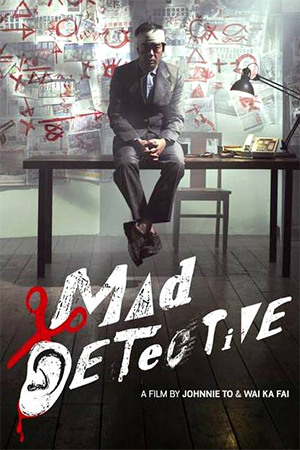 A detective stabs a dead, strung up pig while his co-workers watch on. Said detective then asks another to zip him into a suitcase and push him down the stairs. Upon solving a missing persons case (by doing the fore mentioned) the detective then cuts off his own ear and presents it as a present to the Chief of police. All this occurs in the first five minutes and before the title card, clearly stating this is no run-of-the-mill police thriller. That detective is Bun (Ching Wan) a man who claims to see the “inner personalities” of people (who they really are and what they are really thinking) and re-enacts crimes and scenarios to help him solve cases. But with his behaviour becoming more irrational he is let go from the force, his wife leaves him and now spends his days lost, not able to put his unique “gift” into practice. Enter Officer Ho (On) whom having worked briefly with Bun (he was the officer who zipped Bun into the suitcase and pushed down the stairs) enlists him to help with the case of a missing officer who disappeared over 18 months ago. Evidence points to the missing cops partner Chi-Wai (Ka Tung) who Bun attempts to read using his skills. However, Chi-Wai has 7 “inner-personalities” something Bun has never contented with before and as each personality vies for attention and control it pushes Bun, and Ho, to their limits as the border between sane and insane fast becomes blurry.

Directors Johnnie To and Wai Ka Fai (‘Fulltime Killer’, ‘Running on Karma’) once again combine their considerable talents to create a truly off the beaten track mystery. While the actual conceit may take some suspension of disbelief for more hardened and judgemental viewers, it’s a satisfying and intriguing spin that is given credibility by the assured direction and fantastic performance of the leading cast. To and Fai keep things as realistic as possible within the frame of the outlandish behaviour the character often illicits but don’t forget to spin a cracking yarn as well. The initial plot may seem straightforward (young gun enlists eccentric old pro to solve an old case) but ‘Mad Detective’ is anything but straightforward. The narrative and its characters take complex twists and turns that demand the viewer’s attention, as it concerns itself with not just solving the mystery of the disappearance but how Bun’s behaviour takes its toll on him and those around him. Bun’s condition is treated with complete plausibility, the directors wisely never making fun of the character which in turn infuses the narrative with tightly wound tension.

Lau Ching Wan (‘My Name is Fame’) is a revelation as Bun giving as much plausibility to his behaviour as the direction and narrative and carries the picture with his so called “madness.” Never over the top, he nevertheless plays Bun as a character on the edge that deep down is probably being destroyed by his special ability. On (‘Invisible Target’) is equally as good, seemingly playing the straight man to Ching Wan’s theatrics but whose character also faces an about turn of belief: at first believing and wanting to understand Bun’s unique ability and then gradually questioning Bun’s motives and his own confidence. In addition, the direction is also key to the film’s success, the directing team keeping a tight reign on proceedings, shooting everything in a restrained but no less sumptuous manner, tension expertly maintained and even finding time for a creatively staged gun battle.

All in all a grown up thriller that is a unique and rewarding experience and shows Hong Kong still has originality and talent to burn. If you like your cop thrillers but want something just a little different then ‘Mad Detective’ has got both bases covered.