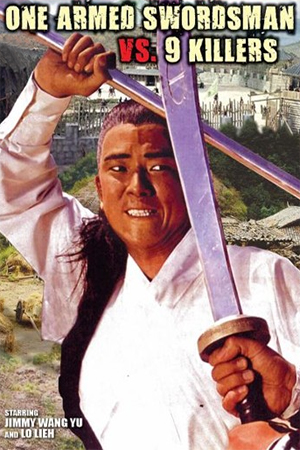 A one-armed avenger (Wang Yu) is searching for a group of assassins who wiped out his family years before. One by one, the professional killers sent to stop him are quickly dispatched as the moody wanderer nears the perpetrator of the crime, yet matters are complicated when the hero saves a young woman from being attacked by bandits and promises to guard her.

Wang Yu pretty much had the one-arm fighter motif to himself in the Seventies – from the early Chang Cheh classic ‘One-Armed Swordsman’ to his self-directed ‘One-Armed Boxer’ films, the Hong Kong star seemed to spend much of the era with one limb less than usual. ‘One-Arm vs. Nine Killers’ is very much at the weaker end of his own sub-genre, an independent kung-fu film that never lives up to the spicy billing of its title.

The problem, as is so often the case, is the uninspiring development of the plot and the mundanity of the action therein. The old revenge narrative was already threadbare by the time this was released, but better films found ways to make it interesting, engaging even. ‘One-Arm vs. Nine Killers’ starts with little or no explanation as to why our hero is fighting and even when it does fill the viewer in, it hardly makes up for the tiresome nature of the minutes that preceded it.

The title also implies a certain amount of variety which is sadly lacking. Wang Yu sweeps through every killer sent to get him without breaking into a sweat and it is only near the end that it appears that the hero is in any danger. A few moments of Wang Yu madness creep into the film to enliven things, but this is mostly a hard slog to get through.