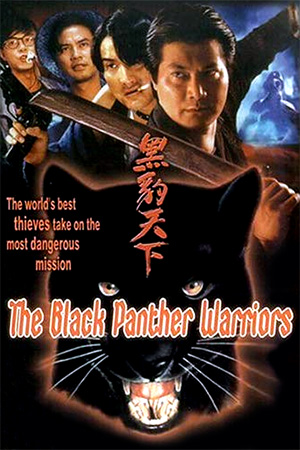 The usual things that are associated with the name Clarence Fok are his stylish visuals and the confusing construction of the film that he seems to revel in. Add to this a penchant for tasteless humour and a general tackiness and Fok’s standard efforts are perfectly summed up. ‘The Black Panther Warriors’ takes these to their very extremes.

Black Cougar (Tang) is a slick superthief with extraordinary talents. When a new client promises Black Cougar unimaginable riches for one seemingly straight-forward mission, he naturally accepts. He therefore builds a team of like-minded persons all with their own amazing skills: there’s a gun-toting charmer who can fire bullets with incredible precision (Leung); a suave gambler who uses playing cards as his weapon (Yam); a beautiful, needle-throwing woman (Ng); an equally charming swordswoman (Lin); a bizarre computer genius (Cheung); and a newcomer who is a skilled fighter (Chan). The actually task – stealing a well-guarded box from a police station – goes without a hitch and all seems to be going well. However, Cougar finds himself betrayed by his employer and is consequently imprisoned by the enemy. These duplicitous employers prove to be working for Bloody Wolf (Wah), Cougar’s supposedly dead brother. With a whole army facing them, the Black Panther Warriors need to rely on each other to defeat the villains.

Somewhere on earth, there might a exist a computer than can decipher the meaning of ‘The Black Panther Warriors’ – but that’s doubtful. Everyone hears about how mind-numbing the film is and people attempt to be the one who will actually understand the ‘comedy’ etc, but no-one has ever succeeded. A very ordinary storyline is weighed down by some of the strangest (and most annoying) characters ever to have hit the screen and an avalanche of stupifying, often tasteless, comedy. What drives the final nails in the coffin of this is one of the worst subtitling jobs ever by Mega Star; it’s hard to remember a sentence that makes any sense. The only slight redemption is the wildly imaginative and surreal action sequences that prop up the film. These show that Clarence Fok at least knows how to create a visually striking feature. Nonetheless, a potential viewer has to ask themselves if they’re prepared to watch the following:

1. Tony Leung doing acrobatics and literally going insane every time he hears Mandarin.
2. Dicky Cheung (arggghhhh!!!!) salivating like a baby if he doesn’t have a dummy in his mouth.
3. Ludicrous melodrama that pops up every now and again.

View at your own risk.