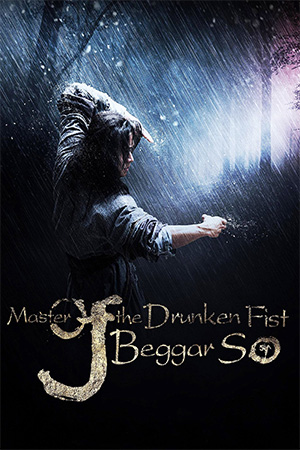 Produced for HBO Asia, alongside ‘Master of the Shadowless Kick: Wong Kei-Ying’, ‘Master of the Drunken Fist’ is a ho-hum attempt at old school martial arts that succumbs to plodding pacing and dull storytelling when the so called Drunken Fist martial arts should be igniting the screen. The flick tells the story of Su Can (Cao Jun) who during the Tangzhi Era is in line to become the newly appointed Emperor’s top military scholar when he’s framed by the dastardly Song Fook-ho (Jang Ming-wang), who has his own nefarious plans to place one of his own men in the coveted spot. Exiled and shunned, Su Can is saved by a group called the Beggar Sect and after much soul searching, romancing and heavy wine drinking, Su Can eventually transforms himself into the ultimate master of drunken fist fighting and sets out on a path of revenge.

All good and well, and a perfect set-up for some great old school kung fu fighting and adventure. Alas, unfortunately this is not to be as after a rather exciting opening that sees Su Can betrayed, exiled and engage in an extended bout of martial arts action the flick unfortunately slows down considerably to tell a not so exciting story. The film becomes all too lethargic in Su Can’s route to drunken fist fighting superiority as he mopes, drinks, romances and yaks and yaks and yaks with various characters. Due to some choppy editing, odd fade outs that end scenes and a distinct lack of action during the middle portion of the film, ‘Master of the Drunken Fist’ never ignites like it should or one would hope. Sure there are some decent training montages as our lead learns his new fighting style but whenever the fight action threatens to erupt, proceedings either end abruptly or grind to a halt so characters can engage in more talking and exposition spouting.

Despite Cao Jun’s best efforts our lead just isn’t likable enough to fully engage with meaning one may lose interest in his plight. There are attempts to inject proceedings with double crossings, twists and revelations but once all these come to light (in another lengthy session of exposition!) one may, again, have lost interest. On the plus, the production is certainly polished and looks good and it’s a noble, if not wholly successful, attempt by the producers/channel to kick start some martial arts themed film production. The action that opens and closes the film is certainly impressive and injects the film with much needed excitement but there just should have been more of it: especially when the film is produced by non other than Corey Yuen. While it’s always good to have a well thought out story with complex characters, sometimes what is needed is simply more fight action and less endless yakking.