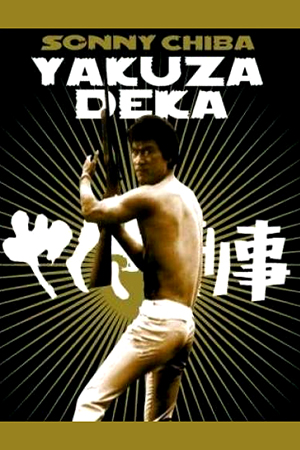 Police officer Hayata (Chiba) is given the mission of going undercover to infiltrate a Yakuza operation. Rather than just going after the regular gangsters though, the Police are looking to capture the real brains behind the outfit – the money men. As Hayata begins to make friends by demonstrating his various skills, everything seems to be according to plan. However, when another undercover cop accidentally exposes his identity, Hayata finds himself in deep trouble as he is caught in the middle of an all-out gang war!

‘Yakuza Deka’ has a rather bizarre opening that seems to consist of little more than a suspiciously homoerotic friendship and a few randomly spliced together action scenes. Thankfully though, it isn’t long before the film introduces several other elements and it is then that you realise that this is in fact an outrageously camp and enjoyable 70’s romp. Playing out a bit like an early James Bond adventure, the film is absolutely overflowing with the kind of retro cheese that is both hilarious to watch and edge-of-your-seat exciting. Mix in some Sonny Chiba and a soundtrack reminiscent of ‘The Pink Panther’, and you have all the makings of a minor classic.

The action for ‘Yakuza Deka’ also continues along the same lines, with the real bonus being an injection of that Chiba magic. Although clearly not as intricate as his martial arts movies, the fight scenes just seem to exude a raw enthusiasm that leaps right off the screen. Surprisingly though, it is the shootouts that seem to provide the most satisfaction as they boast as impressive array of weaponry and are over-dramatised to the point where they really suck you in. If there is one weak point however, it is definitely the finale which almost seems a little too rushed. Rather that treat us to a final showdown between Chiba and the henchmen, we are given a distinctly underwhelming car chase that feels like a bit of a letdown.

Those of you accustomed to the more hardcore elements of the Sonny Chiba back catalogue may not be entirely satisfied by ‘Yakuza Deka’. Despite some excellent action with Chiba on top form, it’s the unintentionally comical moments and camp overall feeling that win out. If you can deal with that though, this is superb entertainment and it deserves to sit amongst the classic crime capers of the 1970s.