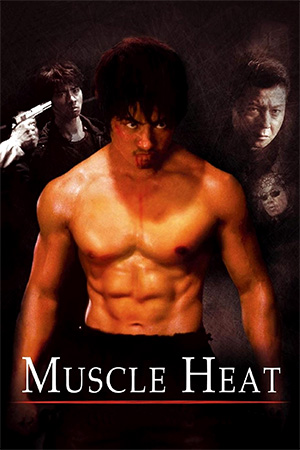 The last time that a Western audience saw Kane Kosugi, it was when he appeared alongside his father, Sho Kosugi in 1988’s ‘Black Eagle’. His acting career didn’t end there though, and he’s actually spent a number of years honing his craft on Japanese television. ‘Muscle Heat’ is Kosugi’s first starring role, but is it a movie that lives up to his father’s impressive legacy?

In the not too distant future, an underground drug by the name of Blood Heat is sweeping throughout the world.  Although its effect of giving the user superhuman stamina and strength may seem too good to resist, its addictive qualities cause the user to ingest quantities that can be extremely fatal.  Of course, the criminals at the heart of this operation see nothing but pure exploitative potential and create a sport known as ‘The Muscle Dome’ for users of the drug to fight to the death.  Enter Joe Jinno (Kosugi), a former member of the U.S. Navy Seals who loses his partner whilst on the trail of the men behind Blood Heat. Coincidentally enough, the last time his partner was seen alive was during a battle in ‘The Muscle Dome’ (against his will of course) which cost him his life.  Now it’s up to Joe to take the law into his own hands and reap his revenge in the ring.

Right from the start, it’s fairly obvious that ‘Muscle Heat’ is an action movie with a very international flavour. I say this not because of the patches of English dialogue, but more because it’s a movie that is light on plot and high on action. The little story we do get is one that we’ve seen a number of times before, and it’s always clear that the simple “underground fight ring” setup is just an excuse to throw in as many action scenes as possible. However, this is by no means a bad thing as ‘Muscle Heat’ doesn’t pretend to be anything else. Instead, it flaunts its action-oriented approach and winds up being an incredibly entertaining slice of almost 80’s-esque cheesy fun.

For a film of this ilk, it’s important that the action scenes are solid and thankfully ‘Muscle Heat’ delivers on multiple levels. The choreography is pretty well handled with several pleasingly fast-paced fights that are particularly impressive in the kicking department. However, the real ace in the hole is Kane Kosugi. It’s clear that Kosugi is a very talented fighter who always looks great whenever he is in action. Considering it’s his first starring role, he really does look the part and his aerial abilities are particularly eye-catching. The only minor disappointment in this department comes during the finale when he faces off against Ken Lo. For some reason, Lo rarely unleashes the abilities that we all know him for and he is forced to suffer through the movie dressed in a suspicious looking bondage outfit!

‘Muscle Heat’ is an action movie, plain and simple. It’s got a predictably fun storyline that does just enough to keep you entertained until the next hard-hitting action scene emerges. It’s also got a really talented leading man in the form of Kane Kosugi and he is clearly one to watch for the future.