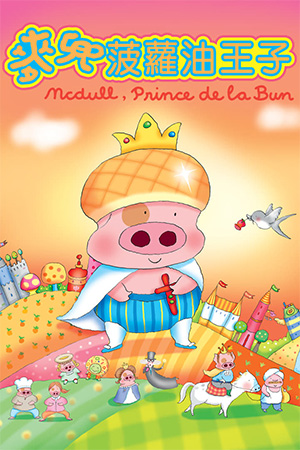 After his successful big screen debut in the excellent ‘My Life As McDull’, the porcine protagonist returns for another animated musing on life. As with the original, this feature is far more complicated than the cute eponymous character would initially imply, managing to head in a philosophical direction that sets it apart from even the most celebrated of its contemporaries.

As Hong Kong’s landscape changes and its redevelopment continues apace, young piglet McDull continues his journey of self-discovery and self-examination. The shy, socially-deficient youngster is sternly supported by his tough-talking, yet loving matriarch whose own desperation for a better future leads her to constant distraction. While his primary school is teeters on the brink of closure, McDull finds himself returning to the fantasies that help him cope with the upheavals in his life. His mother, though, is keen to involve her son in the fantastical adventure of the ‘Prince De La Bun’ – a story which proves to be a thinly-veiled adaptation of what really happened to the piglet’s father.

Perhaps even more than the original, ‘McDull, Prince De La Bun’ is a film that revels in its own visual magnificence. Toe Yuen’s creation throws together standard animation with 3D effects to conjure up a style that is as breath-taking as it is unique. Flooding the screen with this colourful and utterly beguiling look, it’s difficult not to get swept along by the sheer potency that Yuen’s work offers; while McDull is simply drawn, the monolithic Hong Kong surroundings that provide the backdrop to his adventures are made up of said 3D effects – a mesmeric blend.

While it is easy to fall in love with the style of the film, it’s important to remind oneself of the actual objectives of the work and try to examine if the narrative is successfully executed. It is in this area that ‘McDull, Prince De La Bun’ really flounders for much of its running time. The first 40 minutes are crammed full of ideas – far too many in fact – and the storyline suffers as a result. Jumping from one plot thread to another, the story never feels as if its anchored to a particular point and appears to be content to remain aimless. Such distractions aren’t helpful to the overall cohesion of the film. It’s true that, when one realises what the point of these vignettes really is, the message rings true. However, the earlier frustrations are nonetheless difficult to forgive.

Admirably, the final twenty minutes of ‘McDull, Prince De La Bun’ has the kind of emotional punch that great animation often boasts. As the story of McDull’s errant father becomes the focus of the film, it becomes increasingly difficult not to be moved by the themes it tackles. The adult McDull’s statement that while his father was desperate to be in the past and his mother always looked to the future, he was alone in the present, is a line that resonates long after the credits roll.

‘McDull, Prince De La Bun’ is flawed, though certainly worthwhile viewing. The story staggers around for more than half of the running time, but eventually reminds the viewer why McDull is so much more than a bog standard animated feature. With musings on death, love, nostalgia and responsibility, ‘McDull, Prince De La Bun’ is a mature work that provides entertainment with enough substance to appeal to every generation, with characters that it’s impossible not to care about.