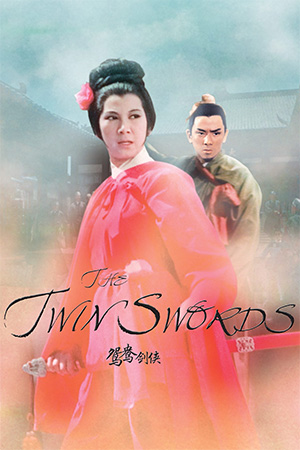 After escaping the confines of her family, Jin Lian Zhu (Chin Ping) and her new husband Gui Wu (Jimmy Wang Yu) set out on a journey to locate Wu’s aunt. Before they can do that though, they are ambushed by the Red Lotus sect and Zhu is imprisoned inside one of their temples. Without the ability to save her by himself, Wu heads back to the Jin family home and pleads with them to rescue their daughter. The family imprison Wu because of his betrayal and head off to take on the Red Lotus alone. However, once they arrive at the temple they soon discover that their mission isn’t so simple and they may need Wu’s help after all.

‘The Twin Swords’ is the second entry into Hsu Tseng-Hung’s Red Lotus trilogy, with the other movies being ‘Temple Of The Red Lotus’ and ‘The Sword And The Lute’. As with its predecessor, this is a very early Shaw Brothers production that borrows heavily from the Chinese opera school of storytelling. This means that the film has a slightly stiff, theatrical structure that certainly makes it feel somewhat dated. Thankfully though, it does include a more streamlined narrative than ‘Temple Of The Red Lotus’ (yes, we do actually get to see the Red Lotus themselves) and some fairly solid performances that boost the film up a notch or two.

As far as the action goes, ‘The Twin Swords’ is certainly far from the best the genre has to offer. This is mainly due to the very staged way of choreographing the fights that make them feel more like an overly rehearsed dance routine than a battle. That being said, the lavishly constructed Shaw Brothers sets do go a long way to making the combat more enjoyable. Once the family head towards the Red Lotus Temple, they come up against a number of elaborate traps that all add to the excitement factor. It’s also worth mentioning that Wang Yu’s fight scenes do generally look a little sharper than the rest, while Lo Lieh’s one and only action scene boasts a nicely violent edge.

‘The Twin Swords’ isn’t the type of Shaw Brothers production that will appeal to everyone, mainly due to its fairly dated style that lacks the superior fight choreography. If you are prepared for that though, you’ll no doubt find enough heroic antics and action here to keep you entertained.