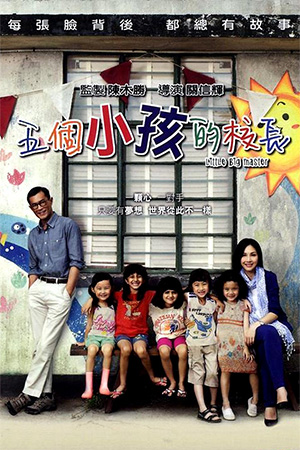 Hung (Yeung) is the head teacher at an elite Hong Kong school that’s frequented by the children of the city’s wealthiest and most influential people. As the pressure increases from parents and the authorities, Hung decides to quit her job to go travelling with her husband Tse (Koo) who also hands in his resignation. One chance viewing of a television news feature about an ailing, under-funded rural school about to close delays their decision however and on learning that the five pupils there will simply fall through the social cracks should this happen, Hung decides to become the teacher there until the end of term. What she finds there, though, is a world apart from the well-financed, resource-rich schools she has taught in before and Hung finds herself acting as teacher, caretaker and manager of the school.

Nothing strikes fear into the heart of the traditional film review like the phrase ‘Inspirational True Story’ especially if the lead character doesn’t have a whole legion of skeletons in their closet that can make the film ‘credible’. Yet when a delightful fact-based story is brought to the screen with need for very little embellishment like ‘Little Big Master’, surely even the most rancidly cynical critic can bring themselves to nod in approval.

The story behind ‘Little Big Master’ is one of those hundreds of those great acts that happen around the world, but rarely make it to screen unless given a political slant. To also find that the people involved are ‘nice’ – the most spine-shudderingly fearsome tag to give anyone – means that this should never have hit Hong Kong cinemas with quite the trajectory it did. It became the year’s biggest domestic hit, was nominated for a slew of awards and left an indelible mark on the territory. The simple fact is that ‘Little Big Master’ is just one of those films that comes along and satiates the public need for something a bit more heartfelt. In this regard, Adrian Kwan, a director who has cut his teeth on films that focus on altruism and love, is to be thoroughly commended.

The praise lavished on the film shouldn’t let people fall into the trap of thinking that this is just a piece of emotionally-manipulative populist entertainment; of course it consciously tugs the heart strings, but all film, whatever its genre, is an attempt to stir emotion or intellect – it’s just a question of how well it’s done. Had this been made in Korea or Japan one might have expected more orchestrated moments and a few carefully placed slow-motion scenes designed to get the tears going. Yet Hong Kong cinema has never been afraid to give its dramas a certain everyday normality. There isn’t the obsession with smeared-lens images of cityscapes in telling stories like this. We’re not talking Ken Loach here – as good a film-maker as he is he certainly wouldn’t be able to restrain himself from turning this into a tub-thumping polemic – but it means that this believable, affecting cinema.

With strong performances from its two leads, a cast of solid background characters and a nod to the indomitable spirit of the Hong Kong people, ‘Little Big Master’ is captivating viewing.