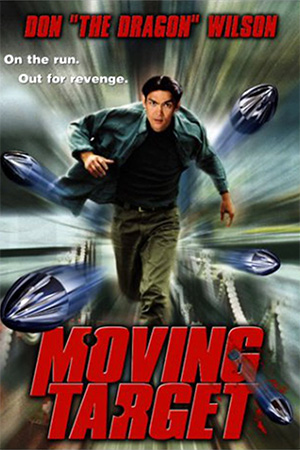 Another 90s action quickie from one time one-man-kickboxing-movie-conveyor-belt Don ‘The Dragon’ Wilson, ‘Moving Target’ is the last film he made for one-man-B-movie-conveyer-belt Roger Corman. Having produced all 8 of Wilson’s ‘Bloodfist’ films (yep, 8!!) and a couple of his other flicks (‘Future Kick’, ‘Blackbelt’), ‘Moving Target’ is basically ‘Bloodfist 9’ all but in name. In fact, it’s a remake of Wilson’s own ‘Bloodfist 4: Die Trying’. Wait, what!!! Yep, Corman and Wilson remade one of the more entertaining ‘Bloodfist’ entries (for reasons even this B-movie connoisseur can’t fathom!), only this time instead of taking place in LA, they’ve set the kickboxing action in, er, Ireland!

Almost the exact same film as ‘Bloodfist 4’ save for the setting and instead of a car repo man who inexplicably comes into possession of nuclear triggers (disguised in a box of chocolates!), Wilson is now on a trip to Ireland to meet his love he met via the internet (!) and inexplicably comes into the possession of nuclear triggers, now disguised in a six-pack of beer! Yep, that’s the actual set up! Other than those slight differences it’s the same film with many of the exact same scenes, action sequences and characters only this time all played out in Galway, Ireland and with Irish accents! As baffling as all that seems (and it’s often baffling!), ‘Moving Target’ is cheap and (mostly) cheerful, and at least features a ton of kickboxing action.

While often too daft for its own good (a six pack of beer containing nuclear triggers; Wilson and another fighter fighting shirtless on the Galway docks; a detective constantly drinking tea at the scene of a crime!) there’s an odd charm about it. No, really. Well, sort of. Don Wilson is his usual likable self, gets to kick loads of butt and there’s something odd and unique about seeing him run around Ireland kicking lots of ass. Corman set up shop in Ireland for a brief time back in the day to produce his brand of cheap B action pictures and churned out a fair few including this one. It ain’t great, Wilson has made much better but if you haven’t seen ‘Bloodfist 4’, then you might get more out of it.