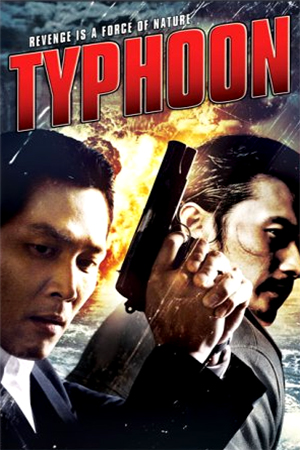 When an American ship carrying nuclear weapons technology is hijacked, the South Korean government order Agent Se-Jong (Jung-Jae) to find and apprehend the culprit. According to their intel, the man behind the theft is Sin (Dong-Gun), a North Korean pirate who has a natural hatred for the South after they caused the death of his parents. Whilst learning about his background, Se-Jong begins to sympathise with Sin’s upbringing and although he knows he is doing the wrong thing, can understand his reasons for harbouring such deep hatred. When the two men finally meet, a bond is formed but despite their obvious connections they know that for the sake their missions one of them has to die.

Back in 2005, ‘Typhoon’ broke the record for the highest budgeted South Korean production, clocking in at around US $15 million. In terms of both scale and style, it’s clear to see that the film makes the most of these added resources, sporting a very polished look and shooting in a number of international locales that give the film a very epic feel. Unfortunately, as Michael Bay continues to prove, these aspects alone don’t make for a good movie and ‘Typhoon’ definitely stumbles on a number of other elements.

The plot for ‘Typhoon’ feels like a very lightweight version of ‘The Killer’, with two characters who could have been friends forced to fight on opposite sides of the law. Unlike John Woo’s aforementioned classic though, ‘Typhoon’ rarely seems to focus on the people involved and instead wastes far too much time jumping from country to country just so that we can hear another set of people telling us how dangerous the villain is. When we finally do get a short burst of story, you quickly realise that these characters are about as one dimensional as they come, with both of the leads having very clichéd motives for fighting (essentially a sick/dead relative) and personalities that rarely progress beyond the basic good or bad. There are a couple of minor positives in the form of Jang Dong-Gun’s performance and a short five minutes spent with Lee Mi-Yeon that actually makes you give a damn, but the majority of the film just feels so preoccupied with trying to look pretty that you’ll quickly give up on trying to care.

For a film so keen to emphasise its action elements, it’s surprising to see that there are very few genuinely exciting moments within ‘Typhoon’. The first shootout doesn’t materialise for a good 20 minutes and when it finally does it’s exceptionally brief and suffers from one of the worst cases of shaky cam syndrome that I have ever seen. Shortly after this, the two enemies meet properly for the first time but instead of being the tense confrontation that we were hoping for, it just fizzles out with a rather predictable “hey, we could be friends!” moment. This leaves the finale as the only really big action showcase and I guess you could say it fairs mildly better, although I know that isn’t exactly saying much. The best section of this sequence is easily the battle between the SWAT style soldiers and the pirates, simply because it feels slightly more realistic and there are some good weapons on display. However, being your typical Hollywood clone, this soon switches to the final one-on-one duel which is just a mundane (and shaky) knife fight that is cheesily set against a backdrop of giant explosions.

‘Typhoon’ certainly succeeds at being the kind of Hollywood blockbuster it hopes to be, and it is because of this that it is such a huge disappointment. The whole production just doesn’t seem to pay enough attention to the plot or characters, and seems far more concerned with flaunting its lavish locales. If this were a holiday brochure I’d be okay with that, but for a movie it just isn’t good enough.