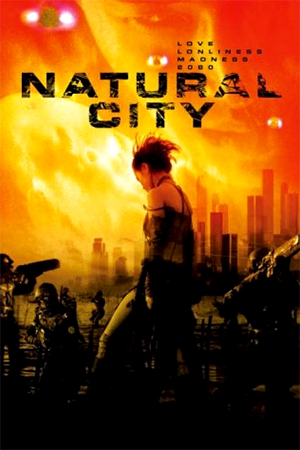 Ambitious Korean sci-fi, ‘Natural City’ is beautiful to look at and has some good ideas going on but is overall a lifeless and soulless experience. In the future, machines have fully integrated with the human race. Four “deviant” cyborgs break into a hi-tech facility looking for classified information. The Military police are called in and engage in battle with the robots run amok. R (Yoo), one of the top military police, has fallen for a cyborg himself, a dancer at a local club. Reluctant to engage in combat with the renegade bots, he puts his team in danger and is suspended from the force. His robot love, Ria (Seo) is due to expire in a few days and he is desperately trying to find a way to keep her alive. Meanwhile, one of the cyborgs (Jong) from the earlier confrontation has survived and is now set on his own violent rampage across the city.

There is no doubting the visual spectacle of ‘Natural City’. The future world is beautifully rendered, often in intricate detail, through a mixture of CGI and miniature effects. The visual effects blend into the frame rather than dominate it, Min Byung-Chun wisely choosing to film much of the movie in the real world rather than against a green screen. The design, from costume to production, is of a high standard and helps to envelope the viewer in the futuristic world. However and as often can be the case when style takes precedence, the actual story and characters of the film are somewhat lifeless. Now the concept of disconnection and loneliness in a hi-tech machine dependant world is certainly present but often the characters come across with no real personality or purpose, that the viewer eventually loses interest in them. Leading man Yoo (‘Oldboy’) particularly suffers from being a little too nonchalant and lifeless about, well, everything. His character is supposed to be in love and worried his cyborg partner is dying but come across more as a petulant teenager and annoying twit than a futuristic hero.

Likewise, the pace is never really in a hurry. Not that is has to be jet propelled but the film just kind of trundles along from one concept or scene to another. Things do pick up with some lively and visually stunning action scenes. Portraying the combat cyborgs in action, their heightened skills are achieved using practical means and stunts rather than CGI, making them all the more impressive. Yet, there isn’t enough action to make ‘Natural City’ a fast paced future thriller and the drama isn’t engaging enough for it to succeed as a slice of serious, romantic sci-fi.

It’s not all a loss as Min Byung-Chun has tried hard to create a unique future world and on those terms he has succeeded. Lee Jae-Un Lee does offer some respite from the lifeless characters with her sparky performance as Cyon and the visuals and action certainly make ‘Natural City’ worth checking out at least once. But ultimately the overly serious tone and lack of energy telling the story make ‘Natural City’ a frustrating and hollow experience.