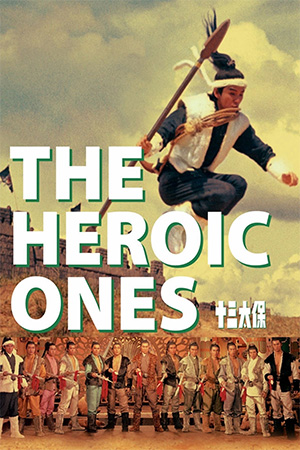 An early Chang Cheh epic is given the regal treatment that Celestial’s first batch of DVDs have enjoyed and therefore receives a new lease of life. The film’s importance in terms of the Shaw Brothers’ story and the famed David Chiang/Ti Lung partnership is fairly obvious though it will be explored following a reminder of the narrative.

The setting is an ancient China in turmoil as various barbarian forces battle for control of the land. The wild-living, hard-fighting Mongols are allied with other warlord clans in their clash with General Wang and his vast army. The Mongol leader and his thirteen sons plan a forceful campaign against General Wang, while manipulative Lord Zu Wen plans to use any proposed victory to his advantage. One of the thirteen sons, Chun Xiao (Chiang), manages to defeat the fearsome figure-head of Wang’s army, but also succeeds in angering Lord Zu Wen in the process. Nevertheless, the thirteen sons are still focused on a brave attack on a nearby fortress and courageously power their way into the city. While there, Chun Xiao meets a young resident (Lily Li) who offers the brothers shelter while they hide from the vigilant troops looking for the intruders. This brief encounter is a rare chance for the youngest son to show his more humane side, but even this is disrupted when two of his brothers attack her and are forced out of the house by Chun Xiao. Following a final clash against General Wang’s might and a decisive victory, the Mongols celebrate their part in the new rulership of China. Lord Zu Wen has not forgotten about his humiliation though and devises a scheme to assassinate the Mongol king and his princely sons.

Chang Cheh’s ‘The Heroic Ones’ is an ambitious and sumptuous martial arts epic that set a benchmark for Shaw Brothers at its time of release. From the opening frames, crammed as they are with scores of extras and colourful design, it is clear that the sheer scope of the film is beyond that of the average genre production. Cheh takes a historical context and fills it with an immense cast of familiar faces, most notably an early teaming of David Chiang and Ti Lung. Due to this ambition, it is easy to sit back an admire ‘The Heroic Ones’ though slightly harder to feel genuine devotion towards it. Many of the elements that are essential to any classic are present i.e. strong characterisation, a solid storyline and competent fight choreography. However, the film lacks the real heart that the great Chang Cheh hits managed to bring to the screen; the heroes are not always easy to empathise with and the sheer amount of characters can, at times, be confusing. It is also reasonable to say that the two-hour running time tends to slow down the pace to an unnecessary degree, taking away the overall polish – it is easy to imagine that, had Cheh directed this later in his illustrious career, he may have rectified this problem and displayed his mastery of the genre.

The partnership between David Chiang and Ti Lung lacks a certain cohesion, perhaps due to the fact that this is very much Chiang’s film while Ti Lung is underused. Later films in their continuing screen chemistry proved to be more memorable, but ‘The Heroic Ones’ should act as an excellent platform for fans eagerly awaiting Celestial’s upcoming releases. Chang Cheh does manage to conjure up some superb moments though. The scene in which David Chiang begins a brief, yet touching friendship with Lily Li is a fine contrast to the chaos of the previous battle sequences. It is the odd incident like this and the final stand of Ti Lung’s character that show how Chang Cheh at his very apex. Unfortunately, however fascinating ‘The Heroic Ones’ definitely is, it fails to live up to these isolated moments. It remains a worthwhile addition to anyone’s collection though, but is not among Cheh’s finest works.