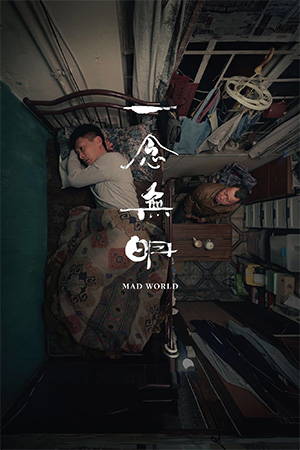 Former financial analyst Tung (Yue) is released from a mental health facility having suffered a severe mental breakdown. His estranged father (Tsang) is there to meet him and takes him back to his tiny Hong Kong flat while he recovers. Tung begins to make tentative steps back into his old life, but finds that the stigma of his illness goes everywhere with him and former friends are reluctant to be seen with him. While he continues his battle to return to some kind of normality, Ting also contends with his damaged relationship with his father and meeting his former fiancée for the first time since the breakdown.

Mental illness has been a taboo subject for cinema for many years. Despite the occasionally successful examination of it in a few films, most of the time mental illness is suffered on screen by dangerous psychopaths. Sometimes there will be a production that treats the condition, in all it’s varieties, as some kind of enviable personality trait that turns the protagonist into a genius or a delightful ‘wacky’ character; it’s another incarnation of the Magic Negro trope. To therefore sit and watch a film tackle the subject as sublimely as Wong Chun’s ‘Mad World’ is something to savour.

While past portrayals have not necessarily been right or wrong, Wong Chun’s acclaimed drama get so much more right than its contemporaries. It doesn’t treat Tung’s illness as some quirky idiosyncrasy (as the inexplicably praised ‘Silver Linings Playbook’ did) but sees it as something that is tragic, something that makes the viewer feel frustration, sympathy and even anger towards the lead. Make no mistake, Wong Chun is not content to rely on just the black and white of the matter though; it’s heart-breaking to see Tung’s life only just coming back together after so much is lost, but the director also notes that those innocently caught up in the wake are as much victims as anyone else. Tung’s fiancée’s deadened response to his return, having been forced to declare herself bankrupt to pay off his debts, is handled with sensitivity and understanding. It’s a move that takes this already excellent film to another level altogether.

Shawn Yue gives a career best performance as Tung. While this might not be a surprise given how successfully he deals with the challenging role, what is particularly to be noted is that this is a performance of exceptional subtlety. This isn’t one of those Oscar-baiting displays full of carefully arranged emotional set-pieces that are designed to agitate the voting panel into action come award season. This is a quiet, thoughtful performance, stirring and haunting, yet with the promise of hope for the future. Eric Tsang and Charmaine Fong also deserve plaudits for support roles that are more than just there to fill in the blanks.

‘Mad World’ is a special film, a story that is harrowing yet optimistic. It tackles a complex subject with real skill and, while not pretending to be the definitive film on the matter – as if any one film could claim to be – it is a work of rare brilliance.