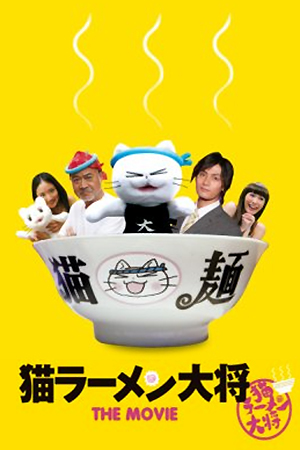 If you’re yet to experience the unique charms of ‘Neko Ramen’, then the overall concept may seem somewhat bizarre. Although that’s a pretty fair assessment considering it revolves around a cat working in a ramen shop, the original show was exceptionally enjoyable because it was a series of short episodes that contained a very deadpan sense of humour. Unfortunately, making the leap to live-action cinema probably wasn’t the best way to bring ‘Neko Ramen’ to the masses…

After he fails to follow in his father’s footsteps (or pawsteps), Taisho finds himself out on the streets looking for a purpose to his life. When he gets a job in a sushi bar, he finally feels like he has found his calling and vows to one day own his own restaurant. Unfortunately, he can’t stop eating the fish so he decides it would be wiser to learn the art of making ramen. Several years later and his dream realised, Taisho has settled in nicely and even finds a friend in a regular customer who seems to support his every decision. However, his business comes under threat when a mysterious new ramen-making cat moves into the area and seems to be better in every possible way…

The first and most obvious problem with ‘Neko Ramen Taisho’ is that there just isn’t sufficient depth in the source to create a feature length movie. In the show we never really needed to know or understand why a cat was running a ramen shop, and it was only ever intended as a quirky backdrop for a series of well-implemented jokes. This means that the movie only has a basic setup to work with, and it’s clear that the writers had no clue how to expand upon these ideas. Instead, they craft out an overly simplistic back story using recycled material from the show and then whip up a rivalry scenario that quickly runs out of steam.

Similarly, the comedy in ‘Neko Ramen Taisho’ just doesn’t seem to work as well as it did in the original animation. The real issue is that most of the gags were designed as a punchline to a two minute sketch. Obviously the movie has a lot more time to fill so they are forced to drag out the routines for a lot longer. Unfortunately this rarely works and they often seem to stretch them out for so long that they stop being funny and start feeling a bit awkward. It’s also fairly apparent that the material dries up by the half way mark and then the makers just resort to placing the puppet against bizarre real life backdrops. This includes a whole five minutes of Taisho being thrust into the faces of real cats, which gets… well, a little uncomfortable to say the least.

Acting-wise, it’s fair to say that ‘Neko Ramen Taisho’ also has very little to offer. Perhaps the biggest disappointment is the replacement of the original voice artist, Rie Nakagawa. While Toru Furuya does an adequate job as Taisho, it just seemed like Nakagawa really nailed the role and it’s a shame that they didn’t bother to bring her back. Kazuki Kato as “the customer” doesn’t really bring much to the role either, as he seems far too clean cut and good looking to be your everyday businessman. Outside of these two, most of the other actors are bit part players and really do little more than statically recite a few lines before their job is done. While none of them are exactly awful, it definitely feels more like TV movie quality than a cinematic production.

In the end, ‘Neko Ramen Taisho’ doesn’t work simply because there just isn’t enough to work with here. The story is weak as water and most of the humour falls flat, with even the puppet thing getting old very quickly. If you like the sound of the idea, do yourself a favour and pick up the series instead.