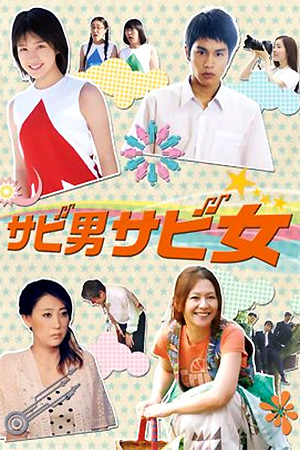 A portmanteau film of unfettered Japanese wackiness, ‘Quirky Guys And Gals’ gives four promising local writer/directors twenty minutes or so a piece to bring their unique ideas to the screen with the vague connection of featuring the eponymous characters.

In ‘Cheer Girls’ a pretty young cheerleader (Sakuraba) decides to use her skills to bring support for people with everyday problems. Teamed with her two loyal friends, the trio offer encouragement by cheering ordinary people through challenges with peppy little routines. Their altruism makes them local heroines, but it isn’t long before their best intentions are woefully misunderstood. ‘Boy? Meets Girl’ follows a lovestruck Japanese boy who discovers a very unique way to get to close to the girl he pines over: he dresses as a girl and poses for pictures for the female photographer. Eventually he has to decide whether to be just a friend in drag or see if she will like his dorkier male side.

Next is ‘Claim Night’ where a woman comes home to find her electricity cut off due to payment arrears. When she calls the customer service line to complain a strange set of events are triggered off culminating in the visit of a company representative who is almost obsequious in his attempts to apologise. Finishing off the quartet is ‘The House Full Of Abandoned Businessman’ where a mild housewife starts to ‘adopt’ unemployed businessman as she meets them aimlessly wandering the streets.

‘Quirky Guys And Gals’ fulfils the obligations of its title: it’s quirky; there are guys and gals and even guys pretending to be gals. The traditional strength of this film structure is that you are only twenty minutes away from the next story and so if you tire from any of these components there’ll be another director’s interpretation along shortly. And each new vignette adds to the promised quirkiness in a way that those not familiar with Japanese humour may be slightly perplexed by.

Of the segments, ‘Cheer Girls’ is the most delightfully odd with director Yosuke Fujita framing all the quiet madness with a strong dead-pan style. It is also the only story that fills its allocation without any slight lagging, though this may be because it is our first dose of quirkiness and we haven’t yet overdosed. That said, each of the quartet has something unusual to offer and work well as extended sketches.

Despite eliciting more bemused raises of the eyebrow than genuine gut-wobbling laughs – as is probably the intention of all four film-makers -, in this world of homogenised, vacuum-packed cinema there needs to be a place for such resolutely colloquial pieces.