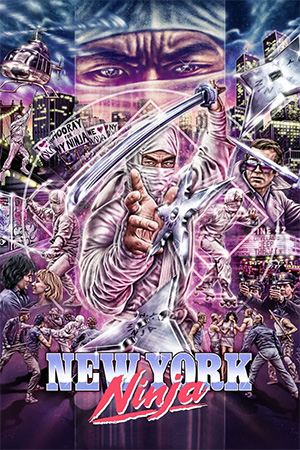 Rising like a Phoenix from the ashes, John Liu’s long lost ninja opus is finally seeing the light of day thanks to the painstaking efforts of the fine folks at Vinegar Syndrome. Originally shot in 1984, ‘New York Ninja’ was abandoned seemingly due to a disagreement with the production company and thought lost. Liu then pretty much disappeared as did most of the original audio and all script and credit material. But thankfully all filmed material survived, was purchased by Vinegar Syndrome, and then meticulously reconstructed with an all-new audio track recorded. And the results are an absolute hoot: a time capsule of earnest ninja awesomeness that dominated the 80s.

Liu is a sound technician for a New York TV news crew whose wife falls foul of a local human trafficking gang specializing in kidnapping young women. Devasted by the death of his wife, Liu does much eccentric mourning (complete with the de rigour screaming “Nooo!” at the top of his lungs of the time!) before deciding to put his ninja skills to good use by taking revenge on the gang and cleaning up the streets of New York.

That’s just where the fun of ‘New York Ninja’ begins, as the movie packs in a lot of cult craziness: seemingly trying to bundle up as much 80s movie madness into 90 minutes as it can. Not only is there a ninja running around NY, but there are also punk gangs (of the type only found in 1980s New York!) running rampant; a fight on roller-skates (!!); a shoe-horned in kid (another 80s movie staple!) for the hero to take under his wing (which leads to a gang of kids dressing up as ninjas to help rescue our hero!); branded I Love NY Ninja throwing stars and t-shirts (cool!); a warped hellhole where all the kidnapped women are held hostage in their underwear; stuntmen wearing an increasingly weird array of hats, masks and face-paint so they can (presumably) appear in multiple scenes; and best of all, a main villain called The Plutonium Killer. Yep, not only is ‘New York Ninja’ a fine 80s ninja opus it’s also a rollicking 80s toxic-waste/mutant exploitationer. Reaching almost Troma levels of madness, The Plutonium Killer is a riot, has ‘Darkman’ like disguise abilities (!), always seems to wear shades and even engages in a cool swordfight with Liu.

It’s this manic energy and commitment to the absurd that makes ‘New York Ninja’ so much fun. It’s certainly of its time and the crew that have rescued and assembled the film have (thankfully) stuck to the vibe and style of the 80s B-movie Ninja boom. The icing on the cake is getting genre stalwarts to redub the film’s dialogue including the likes of Linnea Quigley, Cynthia Rothrock, Michael Berryman, Vince Murdocco, Leon Isaac Kennedy and Don “The Dragon” Wilson, who is perfectly cast as Liu. It gives the film that little extra bit of awesome and captures the nostalgic feeling of countless similarly dubbed Hong Kong and Italian films of the era. How close the flick sticks to Liu’s original intention is up for debate but ‘New York Ninja’ certainly packs in a lot of action and madness. Having featured in the likes of the ‘Secret Rivals’ Trilogy, ‘Snuff Bottle Connection’ and ‘Dragon Blood’, Liu brings his considerable high-kicking skills to NY and while the action is perhaps a bit wonky compared to some of his Hong Kong flicks there’s still plenty of it, some cool swordplay and, as mentioned, he even fights on roller-skates at one point!

The glory days of the 80s ninja flick may be long gone but ‘New York Ninja’ is a welcome reminder of how much crazy earnest fun they were. It’s a shame this never got released during the ninja heyday but great the film is now seeing the light of day. The film looks amazing, testament to the hard work of the restorers and if anything, it’s fun to see an old school film all shot on location in 1980s NY. If ninja films and movies of the midnight/B-movie variety are not your thing (and if you have little sense of humour!) you may not get as much out of it but for all of us 80s ninja cult movie fans out there, ‘New York Ninja’ is a must. Watch with a crowd of likeminded fans in a double bill with ‘Miami Connection’ and euphoria will be reached.

The film ends with the promise of the sequel ‘L.A. Ninja’: let’s hope that was also shot and the footage can be rescued and restored also.