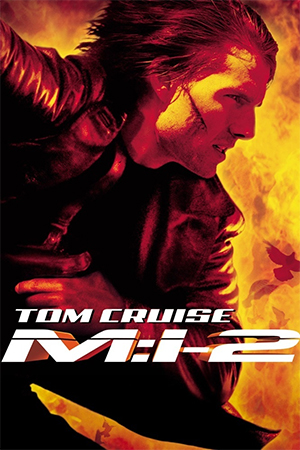 John Woo directing the second ‘Mission: Impossible’ movie must have seemed like a dream come true for many Woo fans.  A huge franchise like this could introduce the multi-talented director to the world and perhaps even allow him to produce the American equivalent of ‘The Killer’.  Unfortunately though, only half of this prediction came true (and it certainly isn’t ‘The Killer’ part!).

Agent Ethan Hunt (Cruise) has his vacation interrupted when a deadly virus known as Chimera is stolen by rogue IMF member Sean Ambrose (Scott).  Seeing as how all of the IMF members are known to Ambrose, Hunt’s only way to infiltrate his gang is by using an old girlfriend (Newton) as bait.  Coincidentally enough though, she is also Hunt’s newly found main squeeze so he is torn between putting one innocent’s life on the line or saving the lives of millions by re-capturing the virus.  Bullets fly, pulses race and doves fly in a race to the finish in this all out action blockbuster.

Rarely has there been a more accurate case for a film to be labelled as “style over substance” than for ‘Mission: Impossible II’.  While the first film bought us a good suspense-filled story that was backed up by a few large stunts, ‘M:I-2’ dishes up a number of large stunts linked together by a dull and inaccessible story. The main premise itself is silly enough, but Woo rarely even touches upon it in great depth. Instead, he seems obsessed with focusing on “artistic” imagery, like dancing cars or flamenco dancers, and all this does is distance and confuse the viewer. He also appears to be intent on drilling home his signature techniques, so pretty much every single action scene is shot in slow motion and those bloody doves are everywhere. It really is a far cry from the Woo movies that we all know and love, and there’s absolutely nothing to sink your teeth into here.

If you are capable of looking past all of the other nonsense, then ‘M:I-2’ does at least reward you with some impressive flashes of action. Although a lot of the ideas are a little more “out-there” than usual (even to the point where they become laughable), Woo does manage to craft out some highly original sequences. I mean, who else would dare to show their hero riding side-saddle on a motorcycle or have him diving out of a building doing acrobatic flips all the way?  It’s all pretty crazy and highly unrealistic, but in Woo’s world of larger-than-life heroes it all somehow seems to work.  Tom Cruise is also worthy of some praise in this department, as you have to commend any star that attempts to do all of his own stunts.  Sure, his fighting technique is a little hokey in the finale, but being able to see his face in all of the scenes really does help suck you into the action.

‘Mission: Impossible II’ certainly offers the world a clear glimpse of what Woo is capable of when it comes to action, but it also lacks his usual quota of emotional drama and camaraderie. My advice to anyone planning to watch it, is to just switch off your brain and try to enjoy it for the pretty pictures.