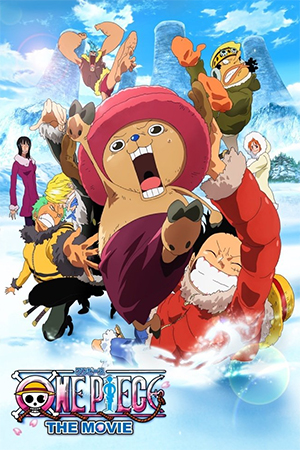 On a day just like any other, the Straw Hat pirates suddenly find themselves in a panic when Nami is taken critically ill. Without a doctor on board, the crew decide to make for the nearest island in the hope that they will find someone who is capable of providing some medicinal relief. Unfortunately, the nearest island is covered with snow and the only doctor lives atop a huge mountain. Ever the caring captain, Luffy makes the decision to carry Nami to the top himself and sets out with no regard for the perils that await. Meanwhile, an evil tyrant returns to the island with the intention of taking the castle for himself. Little do either of them know that a mysterious “monster” lurks within the castle walls, and he has a strong dislike for almost all humans…

As they did with ‘One Piece: Episode Of Alabasta’, the story for this 9th ‘One Piece’ movie is actually a condensed version of several episodes from the original anime series. This time around though, rather than cutting and pasting together existing footage, the whole film has been completely reanimated and mixes in the newest crew members to make the story appear up-to-date. Whilst the overall idea clearly generates some serious continuity issues with the show, it is soon forgotten as the creators have actually done a fine job of updating one of the most enjoyable and heartfelt arcs from the series. Unlike the previous outing, the film sensibly chooses to retain the majority of the best set pieces and jokes from the episodes, as well as mixing in a few new characters and plot points to allow the story to work in a standalone environment.

The action junkies amongst you will also be pleased to hear that the fight sequences have had a similar overhaul, and all of the character’s current power levels are now included. This is particularly beneficial to Luffy, who now has the ability to use second and third gear, making for some pleasing results during his final battle with one of the big bosses. Admittedly, this particular story isn’t exactly overflowing with action, but there is enough here to please the fans and (as usual) the finale certainly dishes up the goods. My only minor complaint would be that Chopper himself does end up a little short-changed, particularly in his final showdown with Wapol as they completely change the fight sequence and end up making it a lot shorter than it originally was.

Although I wasn’t entirely convinced that this particular story needed to be retold, ‘One Piece: Episode of Chopper’ is a surprisingly respectful and entertaining reinterpretation of one of my favourite arcs. Fans of the talking tanuki can breathe a sigh of relief, as this one certainly does him proud.