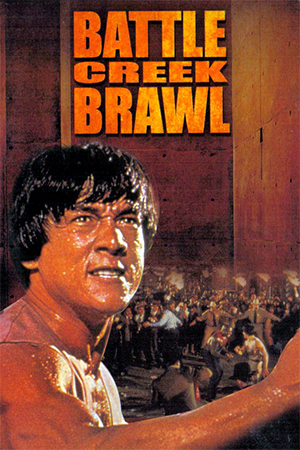 Having already secured his place as one of the box-office kings of Asia with hits like ‘Drunken Master’ and Fearless Hyena, Jackie Chan looked west in an effort to break the highly lucrative American market. With his last film, ‘The Young Master’, smashing numerous box-office records throughout Asia, hopes were naturally high that he could imitate the feat in Hollywood. Following a similar path as Bruce Lee, Jackie Chan starred in this Robert Clouse directed action-comedy which was an attempt to create the kind of buzz about its star that ‘Enter The Dragon’ certainly did achieve. The result failed to cause any major ripples in Hollywood and as is well documented, Chan would have to wait a number of years before he would finally become the global star that his talent deserves. It is interesting though to look back and see what this 1981 production has to offer to present audiences.

Jerry Kwan (Chan) is an eager Chinese-American resident of crime-plagued 1930’s Chicago who concentrates his time on learning martial arts from his uncle, spending time with his girlfriend and helping his father in the family restaurant. Although his father is opposed to him wasting his time on learning kung-fu and points to his more successful brother as an appropriate role-model, Jerry finds his skills come in very useful when local mobsters come to the restaurant for protection money; Jerry sends them away bruised and battered after a clever display of his acrobatic kung-fu dexterity. The mobsters soon realise that instead of getting rid of this tricky foe, they would be better served by using him to fight for them in the upcoming ‘Battle Creek Brawl’. This Texas-based fighting competition promises untold wealth in betting revenue and prize money for the mobsters and therefore they concoct a plan to get Jerry on their side. With this in mind, they kidnap Jerry’s future sister-in-law and persuade him to win the contest in return for her safety. Unfortunately even this soon proves to be more complicated than it first seems when a rival gang kidnap Jerry’s uncle so that he will throw the final bout against their own fighter.

It’s fair to say that ‘Battle Creek Brawl’ is an unfair representation of Jackie Chan’s undoubted talents. Certainly within the action department, Chan is given very little opportunity to shine and is instead restricted by average choreography and unimaginative opponents. Much blame should be on the shoulders of Robert Clouse’s pedestrian direction that simply refuses to allow the film to spark into the kind of life that it sometimes suggests. The combination of narrative thrust and heroic misadventures would be more successfully fused in Chan’s self-directed ‘Dragon Lord’ made a year after this, where the main storyline is deviated from by small-scale sport scenes that serve the film far better than here. The traditional directing that Clouse favours doesn’t allow the proper mixture of East and West so the main selling point of the film – Jackie Chan’s unique blend of action and comedy – is found wanting. With these criticisms in mind though, there are still aspects of ‘Battle Creek Brawl’ that make for an entertaining film. The chemistry between the cast is surprisingly fresh especially the boyfriend/girlfriend combination of Chan and Kristine DeBell and the stern uncle, Mako who gives one of his better performances of the 80’s. Jose Ferrer allows his considerable experience to show on the screen and he plays his villainous role to the usual high standard one expects from this seasoned veteran. Certain twists in the narrative and relationships between the characters prove to be pleasant deviations from stereotype and do give Robert Clouse some kudos as director. Lalo Schifrin’s excellent score for the film – that sometimes recalls his work on ‘Bullit’ – is final proof that this film isn’t a waste of viewing time. ‘Battle Creek Brawl’ scrapes into the 3 star category after noticing these good points and Jackie Chan’s own charismatic persona signifies that, while this film is nowhere near his best, it is still a diverting film.