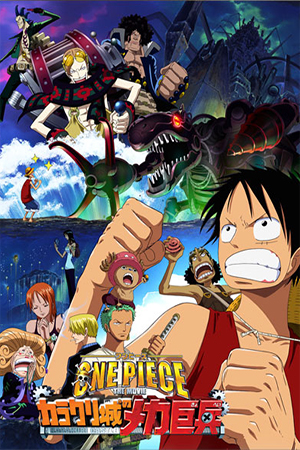 Whilst plundering a sinking ship for treasure, the Straw Hat pirates accidentally stumble upon an old woman who had been taken hostage. In return for safe transportation back to her island, the woman says she can lead the crew to an unimaginable treasure. As you would expect, this instantly peaks Nami’s interest and when Luffy agrees the stage is set for another grand adventure. However, when they arrive at the island the welcome is far from warm and the Straw Hats find themselves forced to weigh anchor some distance from the shore. Whilst killing time, they are able to make headway in the search for the treasure but unbeknownst to them, there are parties on the island who are also taking an avid interest in their activities.

The basic premise of stumbling upon a new island with dastardly goings on is nothing new for ‘One Piece’ movies, but this particular offering does provide something of a change of pace. Rather than being the standard scenario of good guys vs. bad guys, it offers more of an Indiana Jones-style adventure with our heroes being forced to use their brains alongside their brawn (a recipe for disaster where Luffy is concerned). This makes for a fun outing that is well paced in the story department as well as providing a number of comedic highlights, most of which find Nami playing the somewhat sadistic mother to the childish antics of “the boys”. The animation is also pretty spot on by this stage, although it does get a bit heavy on the gratuitous boob shots as Nami and Robin seem to have tripled in bra size overnight. The only real disappointment is the absence of regular voice artist Ikue Otani (Chopper) as she was on pregnancy leave during the making of this movie.

Considering the film lacks any significantly threatening bad guys, it’s pretty evident early on that there are unlikely to be any major fights. However, it does still manage to dish up a decent helping of action. As is to be expected, the majority of this is reserved for the finale as Luffy, Zoro and Sanji all get a chance to face off against some sort of opponent, although there are still a number of highlights along the way as the crew use their powers to solve the puzzles. Perhaps the biggest surprise though, comes during Luffy’s final bout as we are given our first glimpse of him using “Second Gear” (a major step up in his powers). This is not only surprising in terms of revelations for the overall anime, but it is also practically unheard of for something so important to be revealed in what is essentially filler.

While I don’t think I could call it my favourite of the ‘One Piece’ movies, this seventh outing is yet another fine example of how to make a very entertaining side story. It also just goes to show that even when they aren’t focusing on the action, the producers are still very capable of churning out a fun adventure that becomes a must-see for fans when you throw in a few hints of what is to come.