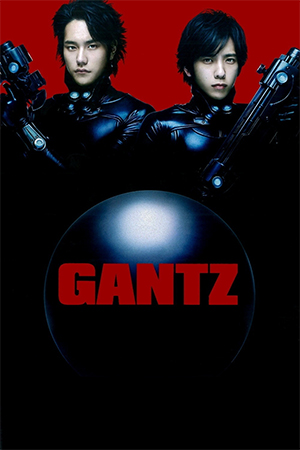 When former high school friends, Kurono and Kato, die during a train accident, they are transported to an apartment in Tokyo inhabited by other confused dead people and the mysterious computer/pod/cyborg, Gantz. Why are they there? What does Gantz have in store for them, and to what end?

‘Gantz’ is based on a long running manga series which has previously been adapted into an animated television show. Considering the TV series is known for its violence and nudity, the movie appears relatively restrained. My nipplometer remained firmly lodged on zero (although it might just be out of batteries; I have been watching a lot of HBO recently) and while there are hefty doses of violence, the filmmakers don’t really revel in it. The action in ‘Gantz’ is good, but not of the super slick “bullet ballet” (what the guns lack in finesse, they make up for in limb explodiness) or martial arts variety. It’s scrappy and tense, which suits the characters and the predicaments they find themselves in well. The computer generated and practical effects are high quality and the violence is satisfying without being gratuitous – the filmmakers seem more concerned with how the violence affects the characters, which helps to give the film some heart.

One way this movie is like the TV series, however, is in its structure. Each day, Gantz springs into life, blurts out music, shows the group their target and starts a countdown – sort of like a giant, fascist, techno-goth radio alarm clock – before sending whoever’s left afterwards back to the ‘real world’. Repeat this a few times and you basically have your movie. It could easily have been 3 episodes of a television show.

It’s like the filmmakers have spent so much time setting up the characters’ situation and their world that they don’t have time for a strong central narrative. They don’t have much time for the side characters either. There’s one fleshy prop in ‘Gantz’ that contributes nothing to the film. Actually, he does manage to put his skin tight PVC suit on (off camera), but that’s his sole contribution in nearly 2 hours. Possibly, people who have read the books will see him and think “Ooh, that guy, he’s going to be awesome later in the story” but I have no idea what his purpose of existence is. Fans of female roles in films won’t have much to cheer either. The women here are seemingly drawn from the minds of sweaty palmed, agoraphobic, YouTube commenters. They’re hot, submissive and have the sole function of fawning over the main male characters.

Really, ‘Gantz’ has the feeling of a 131 minute first act, which it would seem is exactly what it is. After the credits rolled on my DVD there was a trailer for ‘Gantz: Perfect Answer’ which is the second part of the story. ‘Perfect Answer’ looks like it contains more incident and action than inside a sack of drunken honey badgers, so you may want to have that at hand to pop in the player after ‘Gantz’ has finished.

Having said all this, I still kind of enjoyed ‘Gantz’. Maybe it’s because I’m a sucker for a mystery, maybe I enjoy limbs exploding more than I realised, or maybe it’s because I like hot girls in sexy semi-gimp wear. I can’t be sure. However, a movie should be able to stand on its own merits, but despite the situation intriguing me and the action exciting me, I couldn’t help feeling unsatisfied in the end. Let’s see if the second film will alter my perception any.