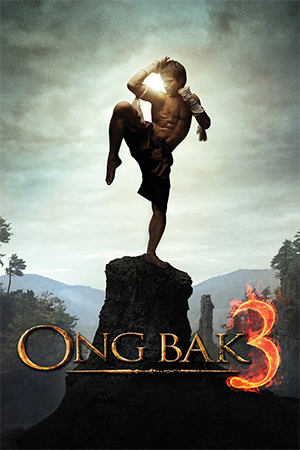 After an exceptionally disappointing second outing, the ‘Ong Bak’ series returns for this third and final entry into the so-called trilogy. Following Tony Jaa’s rather public breakdown on the set of ‘Ong Bak 2’, action maestro Panna Rittikrai is given more control this time around while fellow Muay Thai master Dan Chupong shares top billing. Considering this may well be Jaa’s final film following his entry into the monkhood, is it a fitting conclusion to a promising career or just another slice of self-indulgent rubbish?

After he breaks down at the loss his beloved stepfather, Tien is captured and subjected to rigorous beatings that leave him close to death’s door. Just as he is about to executed, he is saved and brought back home to the Kana Khone villagers. Using the power of the Ong Bak statue (see what they did there?), they are able to nurse Tien back to health although he loses the ability to fight. Luckily, with the help of Pim and some spiritual healing, he is able to regain his movement and once again begins his martial arts training. However, it is isn’t long before the Golden-Armoured King’s Guard catch up with Tien and he is forced to deal with their leader, the evil Bhuti Sangkha.

If you were left scratching your head at the end of part 2, then you’ll be pleased to hear that ‘Ong Bak 3’ picks up right where the last film left off. Unfortunately though, that is pretty much the only positive it has to offer as the movie contains very little of that magic that shot Jaa to superstardom and even less of a plot. After opening with what feels like an endless amount of whippings and beatings, Jaa’s character goes strangely AWOL and the film attempts to pass the time by exploring the dark side of the story. Sadly, aside from a few fleeting pieces of action and Dan Chupong’s best impression of The Crow, most of the details and dialogue are extremely tedious and do little to entertain. When Jaa finally does re-materialise, we are subjected to Primorata Dejudom making police siren noises and a 20-minute montage of some rather odd stretching before it hits the finale. And that people, really is all this film has to offer as there is absolutely NOTHING else that seems to happen.

“But wait!” I hear you cry, “Surely the action has something to offer?” Well, I’m afraid not. As I said before, the majority of the film is spent without Jaa participating in the action so the only notable fight in the opening hour is one sequence where Dan Chupong niftily despatches of several guards. Admittedly it isn’t too bad and there are some fun parts where people smash through walls, but it is very short lived and doesn’t exactly provide anything out of the ordinary. As for the finale, I don’t really want to give out too many spoilers (not that I could considering most of it makes no sense) but sufficed to say there is one sequence of Jaa laying into a handful of bad guys and then the closing confrontation between Jaa and Chupong. Considering the talent involved, you would of course expect this to be spectacular but they basically choose to give Jaa some kind of supernatural upper hand so all he does is throw Chupong around for a few minutes and then it’s over.

‘Ong Bak 3’ has all the hallmarks of a film rushed into production with a complete disregard for cinematic fundamentals and quality control. Fans of Tony Jaa will undoubtedly be disappointed by his lack of involvement and the fact that there is so little action just adds insult to injury. So long then Tony, thanks for a couple of fun movies with some great action, a real shame that it all had to end on such a sour note.