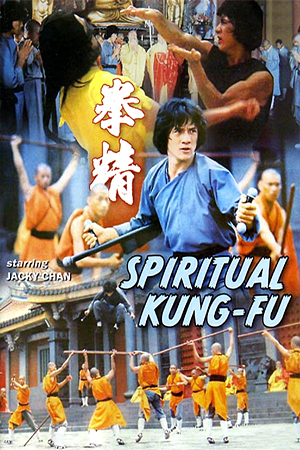 Yi Lang (Chan) is a mischievous orphan who is raised and schooled in the Shaolin Temple.  When his teacher catches him playing around instead of practising, he is punished by being made to guard the sacred books. When he falls asleep at his post, a masked man breaks into the temple and steals the book containing one of the strongest styles of kung fu.   Soon after, a mysterious stranger emerges and begins demonstrating the style from the lost book and utilising it to take over all the local kung fu schools.  Now it’s up to the monks of the Shaolin temple to confront him but the only known style that can defeat him is the lost art of the ‘Five Fists’.  Unbeknownst to Yi Lang, he has stumbled across the lost book which also contains five ghosts who begin schooling him in the invincible style.  Being the only master of the technique, it’s now up to Jackie to take on the stranger and rescue the monastery.

‘Spiritual Kung Fu’ is an early Jackie Chan film that was made during his years working with director Lo Wei. Wei had a reputation for being somewhat lazy on set, so it was quite common for the actors to use his absence as an excuse to experiment. This is certainly the case with ‘Spiritual Kung Fu’, a fairly simple and standard outing that is made all the better by Chan’s injections of humour and superior fight choreography. There’s also some interesting attempts at special effects techniques that certainly add to the film’s appeal as well as providing a few unintentional laughs. Of course, it is far from perfect and lacks the polish that was applied to Chan’s later vehicles, but it’s still a solid effort that has a distinctly old school charm.