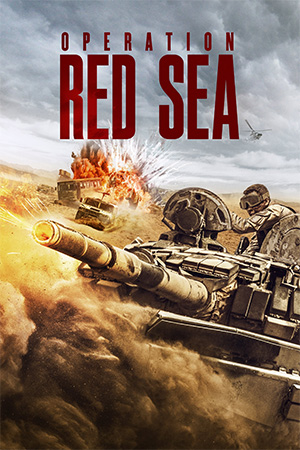 Dante Lam is back in blockbusting military action territory following up the bombastic ‘Operation Mekong’ with the equally bombastic ‘Operation Red Sea’. Much like ‘Mekong’, ‘Red Sea’ uses a real life incident as a jumping off point for some hardcore military based action. Instead of cops gunning after drug lords, ‘Red Sea’ focuses on the Chinese navy, particularly an elite unit by the name of Jialong, who are tasked with rescuing a group of hostages trapped in the war torn country of Yewaire. This already dangerous mission then escalates to insanely dangerous when the team are made aware that terrorist group Zaka (based in the area) are about to get their hands on materials to make dirty bombs. Thus the team are tasked with tracking down and stopping them, all the while getting the hostages to safety. Finding themselves in a sea of a different kind, namely a sea of sand, the team are out-gunned, out-manned and battling for survival.

The real life event that is referenced is the evacuation of hostages during the Yemeni civil war in 2015, but again much like ‘Mekong’, ‘Red Sea’ isn’t concerned with a realistic dramatisation of said event. Instead, Lam uses it as a crux to mount large scale set-pieces and as a showcase to show how brave and brilliant the Chinese Navy are. Nothing wrong with that per se, as while the jingoistic tone occasionally gets in the way of the action it isn’t any different than, say, the latest Michael Bay-US military glorification. What Lam does do this time is present a more streamlined story (save for the extended intro of many, many characters) and use a daring rescue mission (and access to a ton of military hardware) to deliver a super charged action film. It’s big, it’s brash and in several sequences surprisingly gory but ‘Operation Red Sea’ is big screen, blockbusting action done well. The set-pieces (including a tense desert ambush and a tank battle in a sandstorm) are incredibly well mounted, sustained and exhilarating with the actors thrust into a maelstrom of bullets, bombs and bloody combat. Much like ‘Mekong’, and his earlier extravagant blockbuster ‘The Viral Factor’, Lam orchestrates the mayhem with aplomb and wrings some sweaty palm tension out of several sequences to give the film an edge.

The characters refreshingly work well as a team with little clichéd antagonist drama between them to be found (save for an arrogant sniper!) and while the characters are mainly tools to propel the action along, Jiang Luxia (‘True Legend’) all but steals the film as the group’s badass female gunner. If one is not a fan of big budget military themed blockbusters then one is not going to find a lot to enjoy here but if one likes their blockbusters big, loud and slickly made then ‘Operation Red Sea’ will be a fun ride. Sure it gets a little flag waving at times but the focus is mainly on the team, the deadly situation and oodles of impressively mounted action. Lam has fine tuned the Hong Kong military based, large scale destruction blockbuster so much it’s now his signature style. Plus it’ll fill the gap until Wu Jing gets around to making the next ‘Wolf Warrior’.