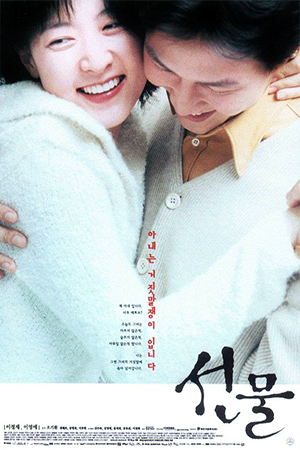 The subject of terminal illness is such a delicate subject to represent on screen that the risk of failure is remarkably high. There’s either the possibility of manipulative melodrama or humane sentimentality – the difference between the two can sometimes be a mere hair’s breadth apart. Perhaps that is why Western film-makers avoid the premise while choosing even more challenging ideas to convey on screen. Oh Ki-Hwan’s remarkable ‘Last Present’ bulldozes through the potential pit-falls of the storyline and delivers a immensely moving drama that never betrays its Korean core.

Yong-gi is an unknown comic who is desperate to break into the big time, but has to content himself with a warm-up act he shares with his loyal sidekick. Every night he comes home late having toiled away fruitlessly, waiting to be noticed and given a chance on Korean television. His young wife Jung-Yeon constantly belittles him on his return and their lives seem to be heading off in different directions. What Yong-gi doesn’t know is that his bad-tempered wife is terminally ill and her aggressive nature is a combination of the pain she’s in and her desire for Yong-gi to be a star before she dies. When the comedian discovers the truth through an unlikely source he is naturally devastated, but keeps his discovery quiet until he can fathom out what to do. As the couple hide their respective knowledge, the arguments continue and the tensions increase, though Yong-gi persuades two con-artists he had earlier tangled with to plan a surprise for his beloved. As Jung-Yeon’s health deteriorates her husband tries to realise their dream while also enjoying his last days with the woman he loves.

Unlike some Asian films that have included terminal illness as a morbid twist near the end of the film, ‘Last Present’ introduces the disease early on and then spends the rest of the duration working up to the tragic conclusion. 110 minutes of such powerful material may not sound like comfortable viewing, but it proves to be an exceptional examination of how ordinary people deal with terrible maledictions. It is a very emotive production and yet the inevitable heartache is only one part of the film.

The central narrative does admittedly go of on an unusual, at times uncomfortable, tangent. The idea that Jung-Yeon feels it is better to keep her illness secret and then belittle the man she loves is a strange one; their is a maddening lack of between the lead couple, a feature that is frustrating from a viewing perspective. Nonetheless, ‘Last Present’ is a film that rewards the patient, adding layer after layer of information throughout and weaving in some poignant flashbacks to flesh out the characterisation. There are areas that require more attention – such as the death of their child – but director Oh Ki-Hwan ensures that there is enough detail in the story to make the leading characters empathetic and their situation sorrowful.

As with all great films, ‘Last Present’ features a few pivotal scenes whose power linger on long after the closing credits. The moment when Yong-gi breaks the terrible news to his estranged parents and begs for reconciliation is intense as is the subsequent family photograph taken of them all. The film ends with a suitably moving scene where a stage routine by Yong-gi is juxtaposed with the final shots of Jung-Hyeon slow demise. Such a flawlessly executed conclusion underlines the power of this superb Korean drama. The music score is admittedly heavy-handed at times, but the general tone of the production is realistic and avoids falling into the melodrama common to poorer versions of the same theme.

‘Last Present’ will not be to everyone’s tastes, though it’s recommended viewing to every lover of Asian cinema. Exceptionally acted, quirky without sacrificing the central poignancy and ultimately very effective, this is Korean cinema at its best. It may tread predictable ground, but the development of the story and the subtle efficacy of key sequences means that this is a production of outstanding quality.