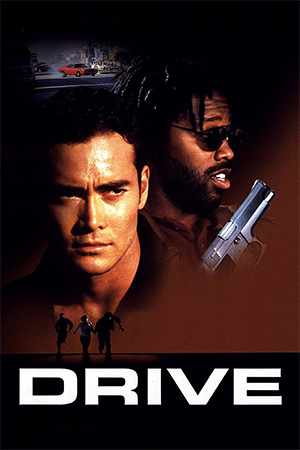 Mark Dacascos is Toby Wong, a prototype enhanced human on the run from the corporation responsible for creating the technology implanted in his chest. He is trying to reach some people who will purchase the module and allow him to free himself from its torment. Along the way, he is forced to take a hostage (Kadeem Hardison) to help drive him to L.A. where he can meet the buyers. After several encounters with small armies, Wong must face the corporation’s newly improved model for a final show-down.

Directed by the little-known Steve Wang (‘Mutronics’ and ‘Guyver: Dark Hero’), ‘Drive’ was just a minor blip on the B-movie radar back in 1997 but it has since gone on to become a cult classic.  The main reason for this is that ‘Drive’ is a slickly executed, action-packed extravaganza that pushes American martial arts movies to the next level. For what many consider to be the first time, the fight scenes in ‘Drive’ are finally on a par with the Far East and the choreography is nothing short of superb. All of the credit for this must be firmly attributed to Koichi Sakamoto and his Alpha Stunt team who, with the aid of lead man Mark Dacascos, really inject some creativity and inventiveness into the action. Of course, this is to take nothing away from the overall production as ‘Drive’ also makes for a pretty good buddy movie. Dacascos and Hardison forge a fine on-screen chemistry and it’s nice to see a film of this ilk that doesn’t just focus on cheap racial stereotyping.

‘Drive’ isn’t without weaknesses, the somewhat hammy bad guys and a few moments of dodgy dialogue spring to mind, but the overall production is just so carefree and fun that they are easily overlooked. If you like martial arts movies and long to see an American outing that does it right for a change, then ‘Drive’ is definitely worthy of your time.