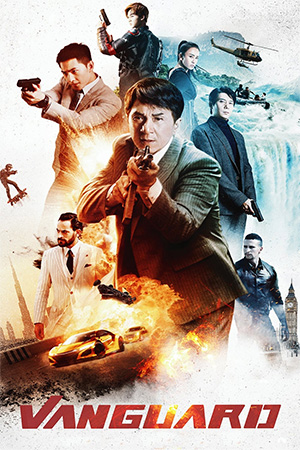 A combination of Jackie Chan and Stanley Tong? Yes please! ‘Police Story 3’, ‘First Strike’, ‘Rumble in the Bronx’…so much to expect from a new collaboration. But wait, wasn’t their last outing together the woeful ‘Kung Fu Yoga’? Ah, now the excited heartbeat of anticipation turns into a cold sweat of dread.

Private security firm ‘Vanguard’ foil the kidnapping of a Chinese businessman, Qin, in London, but this proves to be only the beginning of their dealings with this particular gang of mercenaries. Led by Omar, the son of a freedom fighter (or terrorist depending on perspective) betrayed by the businessman, is determined to have his revenge while also finding the gold that disappeared after his father’s death. And so to Africa where Qin’s daughter is working and a chance to kidnap the one thing he holds dear. Yet international team ‘Vanguard’ is there all of the way and equally determined to protect.

Let’s start with the positives. ‘Vanguard’ is better than ‘Kung Fu Yoga’.

Now on to the negatives. For a film that boasts such impressive production values (for an Asian film at least) and jumps to three different continents, it’s frustrating to report that ‘Vanguard’ is dull. Not talky dull – there is plenty of action and nice big explosions. No, ‘Vanguard’ is dull because everything is so perfunctory. All of that skill in directing action scenes that both Chan and Tong have acquired over the years is absent and what we’re left with is like hearing a handful of rusty nails rattling in a tin can; noisy, atonal and annoying. It’s one of the truly sad ironies that now the great action film-makers of the 80s and 90s have a budget to work with, their product has become so insipid. That probably isn’t a coincidence; never before has so much money been thrown onto screens and yet left such an empty feeling.

‘Vanguard’ is a classic case of ‘Just because you can, doesn’t mean you should’. In other words, just because you can computer generate just about anything now, it doesn’t mean you should. There is a scene early on with a computer generated lion that makes you wonder how it passed post-production. Now if the said lion was in a computer generated landscape or animated film like ‘The Lion King’ it would be quite competent. Put it in with real actors on location and it looks incongruous. Later we get a CGI car chase that once again shows that just because anything can be done with special effects, it doesn’t mean it should; any real excitement from the chase is destroyed by obvious rendering and sped up filming.

While the action is terrifically bland – and that is tough to write as the locations are very well shot – the cast is equally flavourless. Chan gets very little to do and the pretty, photogenic faces that surround him offer nothing of note. The one exception is Ai Lun who does his best with what he’s given to work with – that he gets nudged aside as the lead is one of the film’s obvious flaws. This is the kind of film that makes you long for the days when creators had a $100 budget but a limitless imagination they were keen to exploit; ‘Vanguard’ tries to be a slick, Chinese version of ‘Mission: Impossible’ but has no idea what made the Tom Cruise film popular with viewers and critics alike.