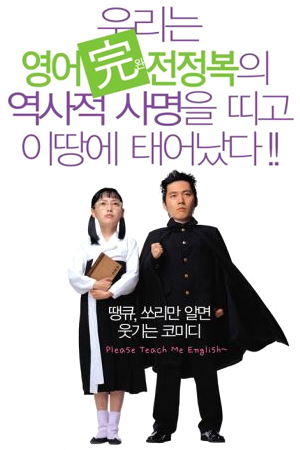 After an American customer comes to their service desk in need of help, the public office decides to avoid further embarrassment over their lack of English by sending one of their colleagues on a course to learn. Mousy employee Yeong-Joo (Lee Na-Young) is press-ganged into attending college to get to grips with the language and, with great reluctance, she attends the class packed with Koreans with their own motives for learning. Among them is oily charmer Moon-su who uses his nascent English skills to spew out corny one-liners to the attractive teacher Catherine. Yeong-Joo is coupled with Moon-su as her study partner and both are given English names to help the learn: the former is now Candy while the latter is given the moniker Elvis by Catherine.

As the weeks pass, the various students reveal their desires to learn the language while ‘Candy’ begins to focus her attention on ‘Elvis’, whose cheesy pizazz hides a much deeper character. Meanwhile the teacher is struggling with her charges and becomes good friends with Candy – relying on her support for self-confidence. Catherine, in turn, is slowly contriving more opportunities for Candy and Elvis to be together, but the plans seem to be continually rebuffed until one particular weekend.

It seems that two things are universal, as applicable in Korea as it is in the UK. Firstly, when learning a foreign language, all students get saddled with new names that are intended to help them feel fully immersed in the culture. When learning French, I still have strong memories of being given ‘Alain’ as a new identity – thankfully I avoided Bruno which was given to some other poor sap. The second thing that never changes is the idea of taking a beautiful actress, sticking a pair of dreadful Deirdre Barlow-spectacles on her and thinking this turns her into a undervalued, hopelessly unattractive protagonist. Of course as with all other films that try this, it is apparent to anyone who has successfully passed puberty that it doesn’t really work; the beautiful Lee Na-Young would probably be charming dressed as Ronald MacDonald with a welder’s mask on. ‘Please Teach Me English’ is so effortlessly delightful that this simple fact is easy to ignore and the strengths of Kim Sung-Su’s film far outweigh the weaknesses.

As a combination of rom-com and familiar tale of a motley crew learning something completely new (i.e, dancing, swimming, pot-holing, splitting the atom), ‘Please Teach Me English’ is surprisingly successful. The first twenty minutes are filmed with an overtly wacky style – fine for this short time, but not something to sit through for nearly two hours. Yet this blossoms into moments of under-stated humour and unexpected pathos, aided by a commendable cast. Lee Na-Young is deliciously dorky as ‘Candy’ while Jang Hyuk excels with a character who is initially laughable, though develops into quite the leading man by the end. A special mention should go to Angela Kelly, the entrancing teacher Catherine who has to give a good performance in Korean as well as her mother tongue. When Eastern films rely on Western acting talent, the results haven’t always been encouraging, but Kelly is more than just a foreigner shoe-horned into the cast. She proves to be important to the narrative and vital to the productions charisma.

Eventually, ‘Please Teach Me English’ succumbs to that constant threat of not knowing when or how to end. Thus the unnecessary two hour running time which needlessly extends the expected into the frustrating. Yet, though it toys with our patience, this is the kind of rom-com that leaves you with a gormless grin on your face after it ends. Genuinely romantic and laugh-out-loud funny (and how many rom-coms can you really say that about?), Kim Sung-Su’s hit film will go down as one of Korea’s better genre offerings. Given the skill their film-makers show with an often maligned genre, that is high praise indeed.