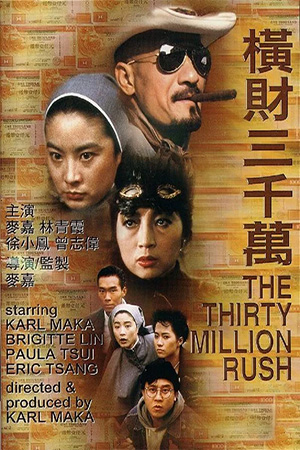 Daily in Hong Kong, old and now useless bank notes are taken to a secret location to be destroyed, lest they get into the wrong hands. One of the main workers there who, for the most part, is a loyal and honest worker, notices a few of the many money bags fall short of the furnace. This accident persuades him to turn thief and, after carefully working out a strategy, he groups together a team who can help him break into the compound at night and steal the bags. One of this band of thieves is a recently released expert thief who agrees to help after hearing of the substantial cash pay out. However, he is followed by his suspicious arch-enemy – an eager and slightly dishonest cop who wants to put him back behind bars. Naturally when he discovers the plans that are hatched, he too wants a share of the wealth. Into this confused blend enters a vigilante nun who decides to stop the various parties in their scramble for the dubious stash.

‘The Thirty Million Dollar Rush’ is the kind of cinematic free-for-all caper that is made within a very confident film industry. The 80s saw the local product gain the commercial rewards of the golden age of Hong Kong cinema and allow a number of very different efforts get released. This enjoyable comedy mixes the familiar ingredients of fast-paced comedy, spurts of action and thin plot, alongside a cast of welcome faces. Effectively, the strength of Karl Maka’s slice of entertainment is its wilful exuberance and obvious intention of creating a fun atmosphere. These goals aren’t always achieved. At times there’s a tendency to slip into the common Hong Kong malaise of over-the-top farce with the performers become annoying stereotypes rather than amusing characters. Once again Karl Maka’s skill as a director is shown to be limited and far too prone to slip into a general lack of order; as the film nears its end, this glaring problem becomes more and more pronounced.

Although this doesn’t warrant any strong commendations, there are aspects which make it worthwhile viewing. It’s refreshing to see a few very popular stars playing against type here: Brigitte Lin stands out as the determined nun while kung fu legend Liu Chia Liang plays his usual hardman figure strictly for laughs. ‘The Thirty Million Dollar Rush’ also has a strong nostalgic quality to it and, though only 15 years old, it’s clear that this is the kind of production that wont be seen in the current film industry. Whether this is a good or bad thing depends very much on the viewer and their expectations.