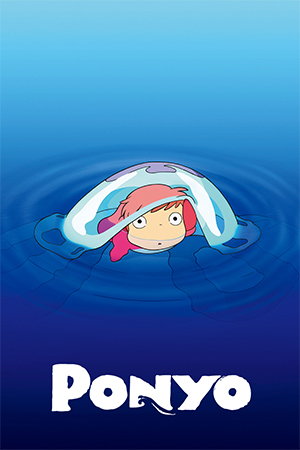 When five-year-old Sosuke discovers a goldfish near the seaside home he shares with his mother and father, a special connection is established between the two. Sosuke names his new friend Ponyo and promises to take good care of her forever. However, unbeknownst to him this is no ordinary goldfish and she is in fact the daughter of the king of the ocean. Having been enthralled by the human connection, Ponyo transforms herself into a little girl and shows up on Sosuke’s doorstep. But having a magical fish princess walking around on dry land begins setting the mystical balance of the world off kilter, and even though the innocent love Ponyo feels for her dear friend is strong it will take some help from the greatest powers in the ocean to make things right again.

Hailing from the masterful mind of Hayao Miyazaki, ‘Ponyo’ is a loose adaptation of the Hans Christian Andersen fairy tale ‘The Little Mermaid’. Much like that story, the main focus of the film is the relationship between a boy and a fish-turned-girl. As with many of his past works, Miyazaki chooses to tell his version of the tale through the vibrancy of youth, providing a very upbeat and innocent exploration of this heart-warming bond. There’s also an obvious personal element included, as Sosuke’s lifestyle is apparently based on Miyazaki’s own upbringing. This seems to give the film an added sense of realism, especially in the opening segment which provides such a brilliantly detailed slice of Sosuke’s life that it almost has you breathing the sea air.

The characters within ‘Ponyo’ are definitely capable of sitting amongst the most memorable in the Miyazaki universe. Well, when I say characters I really mean Ponyo as she is clearly the star and an absolute joy to behold. Despite initially looking like the by-product of some unholy union, you quickly warm to her features and the way in which she transforms into a young girl is brilliantly handled. Part of the credit for her appeal must also go to the vocal talents of Yuria Nara, who seems to suit the visual representation perfectly and sounds exceedingly cute delivering every line.

Another positive for ‘Ponyo’ is the film’s superior animation techniques. There are numerous stories surrounding the painstaking work that was put into making ‘Ponyo’, mostly due to the fact that Miyazaki is a very hands-on director who likes to get things looking just right. His labours have clearly paid off though, as the film looks nothing short of superb. Putting aside the typically high-quality character models, the most impressive element of ‘Ponyo’ is easily the film’s backgrounds. Opening with a beautiful shot that has you swimming with various sea creatures, the film seems to go from strength to strength and has a very ‘Fantasia’-esque feeling throughout several scenes.

Despite my gushing praise, there are still a few minor issues with ‘Ponyo’ that prevent it from equalling the likes of ‘My Neighbour Totoro’ or ‘Princess Mononoke’. My main bugbear was definitely the ending, as it seems to run out of ideas and ends quite abruptly. This is made all the more frustrating by the decision to have Sosuke forced to “love” Ponyo forever, which seems like a very daunting prospect for someone so young. Another slight let-down was the lack of explanation regarding Ponyo and her family. It is touched upon in a couple of scenes, but I really would have liked to know more about her father and mother, along with the undersea world around them.

Overall though, I’d said ‘Ponyo’ is yet another strong Hayao Miyazaki movie that is as uplifting and enthralling as ever. It’s also one of the cutest entries into his back catalogue, with Ponyo and her theme song quickly earning themselves a place amongst my personal Ghibli highlights.