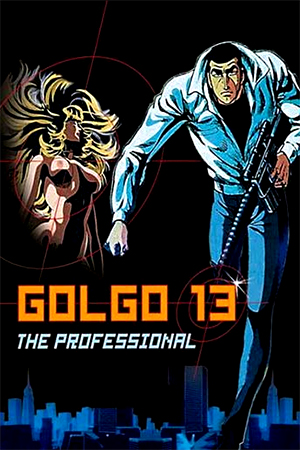 Golgo 13 is the world’s most ruthless executioner, an assassin known far and wide for his amazing skills and ability to complete any job. After he successfully assassinates the son of a wealthy businessman, the hunter becomes the hunted as the father of his victim seeks revenge by ordering a hit on the hitman. Now Golgo must fight off the CIA, the FBI and the US military, while using his finely honed skills to track down whoever is responsible for betraying him.

Remaining fairly faithful to the source material, ‘Golgo 13: The Professional’ is a brutal, balls-to-the-wall action movie that certainly doesn’t hold back when it comes to the more graphical elements (i.e. blood and nudity). However, it is by no means just mindless action fodder, as the film contains an intelligent and engaging story that cleverly opens with an air of predictability before several plot twists help it to play out like a classic spy thriller. Similarly, the film offers up an equally adept introduction to its iconic main character, providing him with just the right amount of cool stoicism to stay true to his profession, whilst also playing up to the audience’s empathy with his displays of moralistic correctness.

Action junkies out there will also be extremely satisfied with this outing as it rarely goes five minutes without some kind of confrontation. These sequences include everything from assassinations to car chases, and all are excellently handled with several larger-than-life adversaries and stylish artistic interpretations. Admittedly, when it comes to punch-ups the moves are fairly basic, but this doesn’t stop it from being any less exciting and Golgo’s clinical style of fighting does seem very suited to his occupation. Out of all of these scenes though, the real standout moment comes during the finale when Golgo finds himself in a ‘Game Of Death’ situation, ascending a building and fighting opponents on each floor to get to the final boss.

The animation style used in ‘Golgo 13: The Professional’ is fairly consistent with early hand-drawn efforts, and could perhaps be condemned for being a little rough around the edges. However, it’s this raw style that gives the film such a unique and exciting vibe, and really helps to create the atmosphere that is required for such a violent tale. This is further enhanced by the director’s desire to experiment with different artistic techniques, such as ’24’ style split-screens and bullet tracking, as well as maintaining a connection to the film’s comic book roots with the occasional static image.

‘Golgo 13: The Professional’ is a truly genre-defining anime classic that is as exciting today as it was back in the 1980s. If you are yet to succumb to the many charms of Japan’s favourite heroic hitman, then this is as good a place as any to get started.