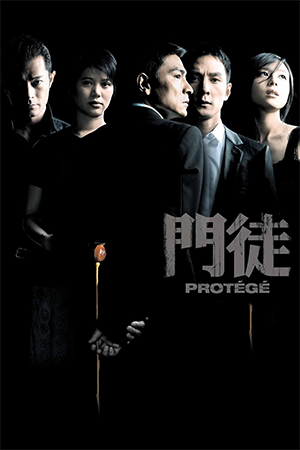 A gripping and often uncompromising look at the Hong Kong drug trade from the seller’s and user’s side, Derek Yee’s ‘Protégé’ is one of the finest dramas to come out of Hong Kong in recent years. Andy Lau is Quin the head of a drug cartel who is now getting on in his years, suffering from ill health and contemplating handing over his empire to one of his young runners, and confidant, Nick (Wu). Nick has been climbing the ranks of the drug business, gaining Quin’s respect and trust.  Unbeknown to Quin, Nick is actually a deep undercover cop about to bring down Quin and his empire. Meanwhile, Nick forms a rocky relationship with his neighbour, Jane (Chu), and her daughter. Jane is addicted to heroin and it’s destroying her life and putting her young daughter in jeopardy. Nick attempts to help her break the habit, and break free of her abusive junky husband (Koo), all the while juggling his role as an undercover operative who’s loyalties are put on the line when the time comes to bring Quin in.

‘Protégé’ is not exactly a fun film but it is a very good film. Rather than charting the entire length of Quin’s drug career and Nick’s undercover mission the film wisely joins them years into both, events now reaching an apex of sorts, as Nick is about to turn evidence against Quin. This is a film more about a set of characters caught up in cobweb of drugs, loyalties and deceit rather than the rise and fall of a drug kingpin. This makes for a refreshing take on the drug empire film and Yee is much more concerned on how the drugs have/are effecting the characters: whether they are making money and power from selling them or destroying their bodies and lives by taking them. The separate story lines correlate almost perfectly giving the viewer a look at both sides of the drug coin: those who profit from it and those who ultimately suffer from it. By keeping it more personal, Yee’s film feels more intimate and urgent, more satisfyingly intriguing, the focus only slipping slightly when he broadens the canvas to take in a sojourn to Thailand to see how the drugs are manufactured.

Lau is as excellent as ever, giving Quin an almost sympathetic edge: a family man at heart who simply sees drugs as a business. There are hints at a barely controllable rage bubbling under Quin’s professional surface but he never degrades into a snarling pantomime villain. The pseudo father/son relationship he shares with Wu’s character Nick is also subtly played, the two having formed a friendship over many years together. Wu is also excellent, playing a character who may not be entirely good, despite his best intentions, and may succumb to either the attraction of drugs or the power derived from selling them. Yet Zhang Jing Chu is the star as the addicted mother, convincingly playing an on-a-downward-spiral junkie who is obviously too far gone no matter who tries to help her or what good might be happening in her life.

While the subject matter is dark it’s never unrelenting, Yee wisely pacing the shocks and dark moments though the gripping sense of dread and eventual doom is always present. ‘Protégé’ certainly shocks not least with an opening scene featuring Jane shooting up, passing out on the sofa only for her toddler daughter to walk in, remove the needle from her arm and throw it in the bin. Likewise, Yee orchestrates perhaps the best drug raid-scene-gone-wrong in an incredible sequence which sees some very inept cops going about raiding one of Quin’s drug labs in spectacularly bad fashion. A frenzied, incredibly mounted sequence that sways from horror, to black comedy and back to horror with wild and captivating abandonment.

In fact, if there is one thing that is a little off in ‘Protégé’ it’s maybe the tone. Varying from intense drama, to a dreamlike state (when characters are injecting drugs) to subtle shades of black comedy, ‘Protégé’ may lose its grip a little with the differing tones. Having said that it never stops the film from being a riveting drama/thriller that is mercifully unpretentious and uncomplicated in it’s approach to storytelling. A tough, challenging and ultimately superb film.