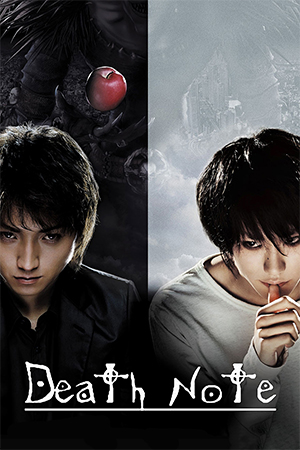 ‘Death Note’ started out as part of the popular weekly manga publication Shonen Jump, before making the all-too-common leap into anime territory in 2006. Shortly afterwards, a live-action adaptation was also put into production with ‘Battle Royale’s Tatsuya Fujiwara in the lead. But, could this be a case of one adaptation too many?

Yagami Light is a normal schoolboy who studies hard and gets high grades in all of his subjects. When he stumbles across a book that supposedly allows the owner to kill people just by writing in their name, he is naturally sceptical but curious.  When it turns out to be true his dark side is unleashed and he quickly works out how to punish the guilty with the help of the book. However, as Spider-man’s uncle once said, “with great power comes great responsibility” and if you abuse it then you better be prepared to face the consequences.

Converting a relatively long and in-depth story into a two hour feature is no easy task, so it’s understandable that a film adaptation would have to make a number of sacrifices. Taking this into account, I assumed that ‘Death Note’ would forego some of the more mundane aspects of the plot whilst still retaining the crucial style and tension found in the original. Sadly though, this wasn’t to be the case and I frequently found the fanboy in me scowling at the screen as a number of missed opportunities passed the director by.

Right from the opening, it’s blatantly obvious that ‘Death Note’ is skipping some of the more important and enjoyable aspects of the story. The most obvious, and probably unforgivable, of these is the introduction of the central character of Yagami Light. Bizarrely, no attempt is made to establish his background or personality which means we never really understand the level of his cunning or his total emotional detachment from everyone else around him. Instead, the film just throws him in with an all-new, clichéd hatred for criminals which is supposed to justify his use of the book. It also has to be said that while Tatsuya Fujiwara may have worked perfectly as a naive and innocent schoolboy in ‘Battle Royale’, he seems completely out of his depth here and is totally inept at unveiling the darker side of his character.

The second most important character within the ‘Death Note’ universe is that of L, Light’s nemesis who is always hot on his trail and matches his every move like one giant game of chess. Once again though, the film lacks a punchy introduction for the character which is so vitally important considering you only hear his voice for the opening segment. Admittedly Ken’ichi Matsuyama does an adequate job with a difficult to translate character but you can’t help feeling he has spent too much time trying to mimic the actions and quirkiness seen in the anime and by doing this, has also lost a lot of his charm.

It’s interesting to note that the film also chooses to add a female lead as Light’s girlfriend, who was never featured within the manga or the anime. Perhaps this could have been interesting if they weren’t so clearly doing it purely for aesthetic reasons and this again spoils the idea that Light showed no real interest in women and their only purpose was as pawns in his grand scheme. However, in fairness they do use Yu Kashii wisely and she does go some way to making up for the lack of conviction shown by Fujiwara as well as making for an entirely new cliffhanger finale to set the film up for an immediate sequel.

Whilst I’m being honest here and putting the film to the sword, I’d also go so far as to say there is a distinctly cheap feel to the whole production which is hardly fitting for what was clearly a big film, both in Japan and internationally. It almost seems like you are watching a TV movie with small sets that do nothing to show the global impact that this criminal mastermind is supposed to be having on the world, let alone Japan. Additionally, the soundtrack played a very important part in the anime and was so enjoyable that I went so far as to buy all three CDs. Sadly that isn’t used here and the score that is presented is dull and seems to go AWOL in the most atmospheric scenes of the movie.

So where does this leave me when it comes to the positives of the movie? Well the special effects used for the character of Ryuk are certainly well done (although they admittedly pale in comparison to most Hollywood efforts) and the use of Shido Nakamura to once again provide his voice means that his persona stays relatively intact. It’s probably fair to say they could have kept a little of his darker sense of humour in there but he’s certainly my most memorable aspect of the film and adds a lot to every scene he appears in. I’d also say the pacing is adequate and even though I spent the running time picking holes, it moves quickly enough to never force you to reach for the off button on your television.

Being a fan of the anime, I’m not sure whether I’m the best or worst person to review this film. It’s fair to say a newcomer without prior knowledge of what has been lost would probably be more forgiving, but when you’re converting one medium to another there really isn’t any reason for the overall quality of the story to dip this much. A Hollywood remake is also on the cards (which is probably only going to tarnish the name further) but personally I think I’ll just be sticking to the source.